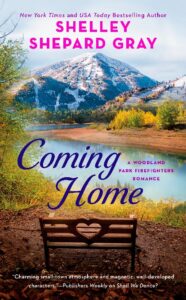 When an army vet becomes a firefighter in small-town Colorado, the flames of an old love reignite in this sweet romance by bestselling author Shelley Shepard Gray

In Woodland Park, a small town nestled in the foothills of Pikes Peak, Anderson Kelly and Chelsea Davis were once the high school “it” couple—the star quarterback and the valedictorian. They broke up when Anderson joined the army and one poor decision at a fraternity party changed Chelsea’s life. Now, she works long shifts in a senior center to support her nine-year-old son, Jack.

After multiple tours in Afghanistan, Anderson has changed, too—physically scarred but mentally strong—and he decides to move back to Woodland Park. Anderson and Chelsea steer clear of each other to avoid reopening old wounds, until they are forced to reconnect through the senior center. They soon discover that the love they once shared never completely vanished. But it will take a fire, a dangerous collision, and the love of one little boy to help Anderson and Chelsea see that the future they’ve always yearned for is in sight…

Ma’am? Can you hear me, ma’am?” Anderson was standing off to the side as his coworkers worked to secure the vehicle with rescue struts-the adjustable tools used to steady wrecks.

“Her eyes were open a second ago, Anderson,” one of them muttered as he pulled out the combi-tool. The hydraulic power tool was a work of art. It could both cut and spread an opening with relative ease.

It was going to be a lifesaver for the middle-aged woman trapped inside. Her Honda Accord had slid onto an embankment off Ute Pass in the storm that had just passed. The vehicle was now gently rocking like it was trying to decide whether to linger on the road or give in to temptation and careen off the cliff.

Boy, he hoped those struts would hold.

“We’re getting there, Doc. Two minutes,” Mark called out.

“Hope so,” he murmured before raising his voice again. “Almost there, ma’am. Hold on, okay?”

The woman inside was sluggish to respond. The airbag had deployed but it hadn’t completely prevented her from hitting her head on something. She had a pretty good abrasion on her forehead. All head wounds bled a lot but this blood flow-from what he could see of it-showed no sign of lessening as it slid down her face and into the neck of her sweater.

Greg, once his captain in the army and now his coworker in the Woodland Park Fire Department, grunted as he worked with two other men to cut open the door. “Hold on, Doc.”

Another time, Anderson would’ve rolled his eyes at the nickname, which he’d received after delivering a baby while transporting the mother from a fire.

Now, though, all he cared about was the fact that the woman in the car was now motionless. “I need her out.”

“If we mess up it won’t matter because the car’s going to be down the mountain,” Mark snapped. Mark had been his unit’s sergeant and had all the necessary attributes to run a small country. He was a natural-born leader and had an innate sense of what to do and when to do it.

Though Anderson was the paramedic on staff, he elected not to prod them again. Everyone there knew what was at stake. Two more minutes passed. Then three. Sparks flew from the hydraulic cutter as Mark continued to patiently cut through the steel.

Then, just as the car began to creak and groan again, Greg stepped back. “It’s stable, but hurry,” he murmured as he pulled a two-foot section of metal out of the way.

Anderson stepped closer and leaned in. His hands were covered in two sets of gloves and his jacket sleeves were pulled up. “Ma’am, my name is Anderson Kelly. I’m with the Woodland Park Fire Department. I’m going to get you out.”

Behind him, he could hear Mark mutter something under his breath. Anderson knew that it likely had to do with his innate need to follow protocols. However, he could care less what they were saying behind him. All that mattered was getting the victim out of the vehicle without either doing further injury or killing them both.

Even though she hadn’t moved a muscle, he kept talking. He’d learned from experience that even your tone of voice could cause someone in distress to relax. “Ma’am, I’m going to wrap my hands around your chest and pull you up. It’s better if you don’t help.”

“Cut the straps and come on, Doc,” Mark said.

The woman opened one eye, seemed to tense, then gave up fighting as Anderson adjusted his grip. As Greg worked around him, Anderson thanked the Lord that the woman was relatively small. The hole they’d made wasn’t big and it would’ve been harder if she’d been bigger. “Got her,” he replied at last.

Curving his body to one side, he was able to create just enough room for Greg’s right hand to slide in and clip the seat belt.

As soon as it was clipped, her body sagged, and he moved to retain his grip, half catching Greg’s hand against the jagged metal. He was barely aware of Greg’s sharp exclamation before pulling back on his heels and yanking the woman toward the hole.

When her head was safely out, Greg helped guide her shoulders through the hole while Mark and two other firefighters helped support Anderson’s weight as he continued to use brute strength to pull her to freedom.

The moment she was out, a backboard appeared. Though he would’ve preferred to immediately carry her to the waiting ambulance, Anderson knew better than to transport her without more information.

While one firefighter searched the inside of the vehicle for the woman’s purse in order to get her identification, Mark checked her vitals. Anderson listened for the numbers while methodically locating the source of the bleeding. After ascertaining that she wasn’t in cardiac distress, he quickly applied pressure.

He was vaguely aware of another team arriving, along with a pair of men from the sheriff’s department. Voices sounded over radios, lights flashed, and sirens continued to blare. However, it might as well have been a mile away, he was so focused on the victim in front of him.

His buddy’s deep voice, so familiar, floated over him like a balm. It brought back memories of being with his team in the desert, the sand coating everything within seconds, as he worked to help a medic save a different life. It was why he became an EMT.

“Anderson?” Mark called out in his former officer’s voice. “We got to go now. We’re about to lose the vehicle.”

“Roger that,” he responded. “Count of three.”

Greg counted and then, just as they’d done so many times on foreign soil, they stood in unison and carried the woman on the backboard to the ambulance.

Anderson nodded to Dave, their newest hire, and Chip, the usual driver, before leading the way inside. Four minutes later, the ambulance was zipping down Ute Pass. In the back, Anderson began her IV and spoke to the emergency room, relaying the woman’s injuries and vital signs. Dave continued to monitor her vitals and check her bleeding.

Ten minutes later, she’d been whisked into emergency and he was standing outside the ambulance, feeling that same curious combination of adrenaline and exhaustion that he always did. They’d done it. They’d freed Mrs. Kemp from the vehicle, got her stabilized, and brought her to the hospital.

“Yeah.” He climbed into the back and closed the door as Chip slowly drove back to the station house. Dave was sitting up front with Chip, leaving Anderson to spend a few blessed minutes alone to regain his bearings. He loved his job and enjoyed both the comradery and the way they made a difference. But every so often he was hit with a memory so vivid he had to remind himself that he was no longer in Afghanistan.

When Chip parked in their designated bay at the station, Anderson began the long process of disinfecting, organizing, and restocking the supplies. It was their team’s responsibility to make sure everything was in order for the next call, whether they were still on shift or the next team was. Chip and Dave helped, each performing tasks they’d done dozens of times over the last year. When Dave turned on the hose to wash the exterior of the ambulance, Anderson removed his coat and boots, and then at last trotted up the stairs to the showers.

Greg and Mark were exiting as he was entering the locker room.

“Yeah. Mrs. Kemp is in surgery now, but I think she’s going to be okay.”

“You did a good job up there,” Mark added.

“We all did. For a minute I thought those struts weren’t gonna hold and we were all going to get a close-up view of that ravine.”

“One day, maybe,” Greg said with his trademark humor. “But today?”

“Today ain’t that day,” he and Mark finished. They’d taken to saying that during all the skirmishes and close calls they’d faced back in the army. As cheesy as it sometimes sounded, they were now superstitious enough to never risk not saying those words.

“We’re headed to Granger’s Last Stand when we get off shift. Want to join us?” Greg asked.

It was not only rare for the three of them to all be working the same day, but also for them to get off the same shift at the same time. But for some reason, going to the same place with the same group of guys didn’t hold as much appeal as it used to. “Yeah, maybe. I’ll let you know.”

Greg looked like he was about to argue, but simply nodded before walking away.

Only later, when Anderson took the time to glance at his reflection in the mirror after showering, did he admit what was holding him back: the multiple scars on his face that always invited a second and third look . . . and the fact that there was always a chance that Chelsea Davis would be at Granger’s.

Though he was pretty much used to the scars-and the second and third looks he received-every time he caught sight of Chelsea, the pain felt fresh and new. They’d broken up years ago, but every time Anderson caught sight of her face, still so perfectly beautiful, the pain of her betrayal returned. On his worst days he feared it would never heal.