Contract Season by Cait Nary 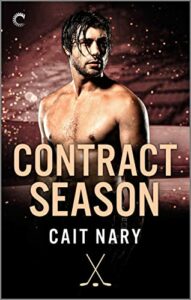 “This is hockey romance for hockey fans.” —Rachel Reid, USA Today bestselling author of Heated Rivalry and The Long Game

A heartbroken hockey player and an up-and-coming country music star fake it for the cameras (or do they?) in Cait Nary’s delightfully sexy new novel.

Brody Kellerman has a plan. First, become the best defenseman in professional hockey. Second, get over his ex-boyfriend so he can focus on his game. Hooking up with the singer at his buddy’s wedding was the perfect solution, but it was never meant to be more than a one-night stand.

Seamus Murry has never planned a thing in his life, including hooking up with a smoking-hot hockey player. Being ghosted sucks, but at least one good thing came from it—the breakout hit song of the summer. Now he’s one of country music’s brightest stars, but one slipup—or in this case, video—might cost him his career.

When their video goes viral, Brody and Seamus agree to fake a relationship. But soon it’s impossible to remember what is real and what’s pretend, and although Brody has no intention of falling for freewheeling Seamus’s charm…life doesn’t always go according to plan.