Dette to Society by Lilo Quie 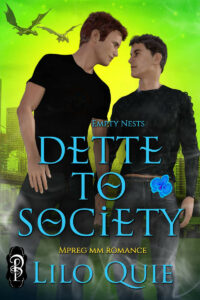 Powel’s dragon told him that Leo was the right one. He smelled right, but after what he did, Powel can’t really face his denmates. Over the years he’s separated himself, giving up on finding a mate while dealing with the terrible memories of his father and how he’d treated his dettes. And Powel was no different at all.

There is nothing ordinary about Tyler, a Dior dragon, who lives in constant fear of dragons finding him and forcing him to be bred. Raised by coyotes, making a living repairing computers and balancing his parents’ pawn shop books gives him a pretty cushy life. When the suppressants he’s been on since his teenage years start wearing off, Tyler finds himself conveniently at the scene of an arson and promptly thrown into jail. It’s not the right season. It’s not the right time, but Tyler’s dragon doesn’t care. The dragons he’s feared forever are coming for him, but this one might be different.