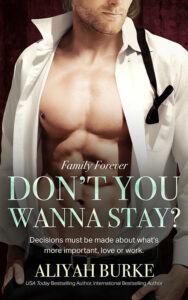 Book 1 in the Family Forever series

Decisions must be made about what’s more important, love or work.

One explosive night between strangers isn’t something billionaire Gareth Ericsson could or wants to, easily forget. When a second-chance meeting with the one woman unlike any he’s met before comes up, he decides he’s not willing to let her go again.

Xandra Asher has enough on her plate during the fundraiser she spearheaded when she finds herself facing the man she had a one-night stand with. He’s as enigmatic as he was that night, and she soon finds he’s inserted himself back into her life.

Work is cutthroat and accusations fly. When careers are on the line, which will come out on top—their jobs or their hearts?

Reader advisory: This book contains references to abduction and drug addiction, as well as scenes involving an emotionally abusive parent.

“Don’t worry, Mr. Yoon, I just got off the phone with the management staff liaison we have at the MontClaire, and Ms. Noit has confirmed with me that all the stipulations we gave them to hold the fundraiser there have been and will be met.”

Xandra turned her right wrist, caught a quick glimpse of her fitness tracker and made a mental note to make sure she changed out the floral print band for her gold one, which would better accentuate her outfit. She listened to her boss, who was a business tycoon. Mr. Yoon had turned all his attention and money to a line of banks that had been on the way out and now he rivaled Rockefeller and Rothschild in his standing.

He was well known in the business world for his brutality, though she tended to laugh at that description. He could be that way, sure. The man took no prisoners when it came to business, but he was a devoted family man, still married to the same woman he’d fallen in love with back in school. They had three children who he worked hard to make sure had respect and didn’t assume they were better than anyone because of their money. Or rather, their father’s money.

She flicked a hand along her red dress, dislodging a piece of lint that dared to land there.

“The car will be by to pick up you and Mrs. Yoon at half past eight. I will meet you there when you arrive.”

“Did anyone say they weren’t attending?”

She touched the device in her hand, even though she already knew the answer. “Mr. Ericsson is unable to attend, as he came down with something, but he is sending his son in his stead. Gareth Ericsson.”

Regardless of the fact that she was rising in the executive elevator alone, she smiled as if her boss stood before her. “I’m sure I will.”

Mr. Yoon laughed, and her smile fell from practiced to real. She truly enjoyed this man.

“One day a man will come by and sweep you off your feet.”

“You keep me far too busy to give my feet a chance of holding still for that to happen.” The door to the elevator slid open on silent gliders and she stepped out into her boss’ waiting area. “Is there anything else you need from me before this starts, Mr. Yoon?”

“I will see you there. I hope you’re heading home to get something to eat first.”

She walked toward her office, the thick mat beneath the carpet masking her steps. “I’ll be on my way shortly.”

“I’m calling back in ten minutes, and you better be on your way.” She opened her mouth, yet he continued, not giving her a chance to speak. “I’m calling security because I know you’ll lie. Get home, and I will see you for this fundraiser. It will be amazing—you always make sure they are.” He was gone, and she still gave her usual farewell before touching the device in her ear, completing the call on her end as well.

The moment the door to her office closed behind her, she kicked off her shoes and moaned as she padded in her sheer stockings to the large leather couch and flopped down.

She could totally go for a full-body massage. Or a hot tub with massaging jets. This fundraiser was important to her boss and she refused to let him down. It wasn’t like this was the first one she’d ever put together—far from it—but this one meant so much to him and his family. It would kill her to disappoint him.

Mr. Yoon had taken a chance on her when she’d first applied for this position. There had been others who had had resumes that had made hers look like a turd she’d tried to polish beside their shining stars, but he’d gone past their ivy-league degrees and chosen her. That had been five years ago, and now she spoke fluent Korean, had holiday gift exchanges with the family, and his children looked upon her as a person they could go to for anything they needed if they were unable to reach their parents.

Moaning once more, she pushed up on her arms and glanced around her office with eyes that were far too blurry and, with her luck, probably swollen. Giving in, she fell back down and mentally ran over everything on her schedule, making sure she didn’t have anything that demanded her attention right now.

Content she didn’t, she began looking for the energy to get back up and make her way down to the car to head home. If she moved now, she could sleep for an hour before she put on the face that would hide all this exhaustion.

Her ear vibrated with the notification of an incoming call. Struggling, she touched her ear and answered the call.

“I would love to hope that your voice was all muffled and exhausted because I’m interrupting some spine-tingling sex, but given your fundraiser is tonight, I’m sure that’s not the case.”

Despite her exhaustion, she smiled as her cousin Xahara’s words reached her.

“You’d be correct. In fact, I’m face first in the couch, wishing I had hands on me. Would you like to spare your man? You know, share and all that.”

“Don’t make me plant some evidence on your ass and shoot you.”

They weren’t words to be taken lightly.

“I won’t. I wanted to check on you before this thing started, and yes, I know you’ve been busting your ass, which is why I’m calling. Are you eating enough? I’d ask about sleep but I don’t think that’s happening.”

“Not until tonight. Thankfully I have the next week off—Mr. Yoon said I deserved it.” Pumped by speaking with her cousin, she managed to wrangle her body up from the couch and back to her shoes. Instead of putting them on, she picked them up and walked out of her office, purse slung over one shoulder and heels dangling from two fingertips. “I think I’m going to sleep and get a massage.”

“We both know you need to. What about that one-night-stand guy?”

Her nipples tightened just at the thought of that man and his touch. She swallowed. This train of thought wasn’t any good for her. At all. Time to shut it down.

“I’m not talking about sex with you right now. I have to get ready for the event.”

It wasn’t an uncommon thing for either one of her cousins to call and they would keep the other company until they reached home. Sometimes it was all the chance they had to catch up, so she listened to the eldest of their trio. True to her word, Xahara ended the call when Xandra reached her apartment.

Her shower was fast and she padded around her place in a silk robe, allowing her lotion more time to soak into her skin. Pausing by the large one-way windows, she stepped close and brushed her fingers along a cool pane. She stared down at the bustling city of Marbleton below her. People going about their business, not giving her any thought whatsoever high up here.

She’d know for sure. To either one. She’d not had sex since that one-night stand she’d dropped her guard for all those months ago. The tingling in her pussy was yet another reminder that she needed to stop thinking about it. She wasn’t getting any tonight.

She ate a light meal, knowing there would be appetizers and hors d’oeuvres at the event. She didn’t have to do a lot of work there—her main role had been to set it up. While she didn’t anticipate stuffing her face, because that wouldn’t be a good look, she would allow herself a bite or two.

Xandra dressed and stood before her three-way mirror, critiquing her outfit. Red and gold, a nod to Mr. Yoon’s company colors. She adjusted the delicate band for her fitness tracker, pleased it blended in perfectly.

After one final look, she touched her gold and diamond earrings as well as the diamond X pendant necklace she wore. It had been a gift from her two cousins when she’d landed this job. It was her good-luck charm and something she didn’t like to go without.

At the door, she slipped her feet into her five-inch heels, swiped her clutch and walked out, exhaustion vanishing with each step. She loved this. She lived for this.

And I’m fucking going to rock this!

Her attitude was the same when she got out of the car at the event and walked in. After handling a few last-minute things, making sure to say hello to Mr. Yoon and his wife, she mingled through the gathered guests, making sure no one was wanting for anything.

She moved to the door that led to the balcony and had stepped out for a quick respite when she noticed a large shadow to her left.

“You know, you’re just as stunning with all your clothes on as you were when I had you naked with your legs over my shoulders while I feasted on that perfect pussy.”

Her legs trembled at that decadent voice. Before she could even pray that she’d misheard the words, or start to get angry at them, the owner of the voice stepped into view, and her breath escaped in a rush.

His tuxedo had been made for him alone—that was obvious by the fit and how it amplified his broad shoulders, trim waist and lean hips. Blond hair, which had been messy when she’d snuck out of his bed after their hot sexual night, was slicked to perfection, and those blue eyes burned straight through her clothing, seeing her nude.

She faced her one indiscretion. Her one-night stand.

If you would like to be kept abreast of what’s going on in the world of Aliyah, you can sign up for her newsletter here.