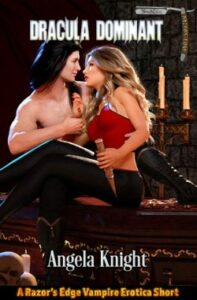 Anika Van Helsing is the last of her line. With his dying breath, her grandfather demands she seek revenge on Count Vlad Dracula, who has killed six generations of her clan. Determined to confront the vampire who has haunted her dreams for years, Anika breaks into his mansion and finds his coffin. She prepares to stake the handsome vamp…

That’s when everything goes wrong.

Vlad Dracula is furious the girl he tried to protect has tried to kill him, and he means to punish her for her lack of gratitude. Her murderous clan has killed his wives, his mistresses and his friends, and he means to end the Van Helsing threat.

But he wants a lot more from Anika than her death — or even her blood. Because Dracula has seen her most secret, shameful dreams. And he’s going to make them all come true.