Dragon in Training by Emily Carrington 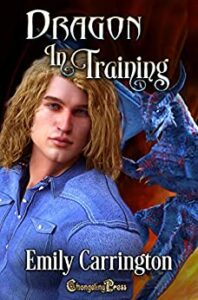 Dragon Food: Something is hunting along the Gulf coast of Florida, and Mark Tavery is tasked with finding it. His expertise in dragons is his pride, but he can’t say the same about his romantic relationships. When he picks up a lamp during his investigation, he’s shocked at his instant attraction to, and all-consuming need for, the genie inside. Mark’s greatest desire is to have Luke in his life and in his bed, but giving in to the promise in Luke’s touch means Mark runs the risk of killing the genie he loves.

Dragon Fire: Luke is a genie with almost limitless power, but it does him no good when his lover, Mark, won’t let him have the two things he really wants: for Mark to rely on him as an equal partner during magical conflicts, and to be dominated in bed. Will Luke ever get the chance to prove that he can be both strong in the field and the perfect submissive in the sack?

Dragon’s Bane: Atlas, a genie-god with nearly limitless power, has one task. He must find the modern equivalent of Cerberus and kill it. He discovers the three-headed dog’s incarnation are three figures that surround his current master — Dan’s current lover, Reese, Mark, a water dragon and Reese’s obsession, and Luke, Mark’s genie. Mark and Luke find their memories are altered and untrustworthy. One thing is clear: Only their love for each other can save them — and everyone at SearchLight — from Atlas completing his terrible final task.