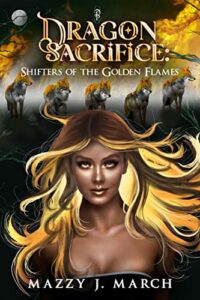 Shifters of the Golden Flames Book 1

My kind have been extinct for thousands of years, or so the world thinks.

I was sent to live with the dragon clan at the age of fifteen. I know my fate. It’s not a big secret. My life was exchanged as a good faith measure between wolves and dragons, a seal to their peace treaty.

The thing is, I’m treated like a prisoner, a pawn, a thing instead of a person.

So when the clan council tells me I’ve been betrothed to three dragons and will be their mate soon, well, there’s only one thing for me to do.

Get the hell out of here…no matter what it takes or who has to be sacrificed.

I won’t be their mate, their slave, the mother to their dragon children. Not me. Never me.

Dragon Sacrifice is book 1 in the brand new Shifters of the Golden Flame series by Mazzy J. March. It features a dragon shifter whose life is not her own. Sent to live with strangers as a teenager, her entire future is laid out in ways she does not want or understand. If she cannot find a way to escape soon, she never will.

When it Falls Apart by Catherine Bybee