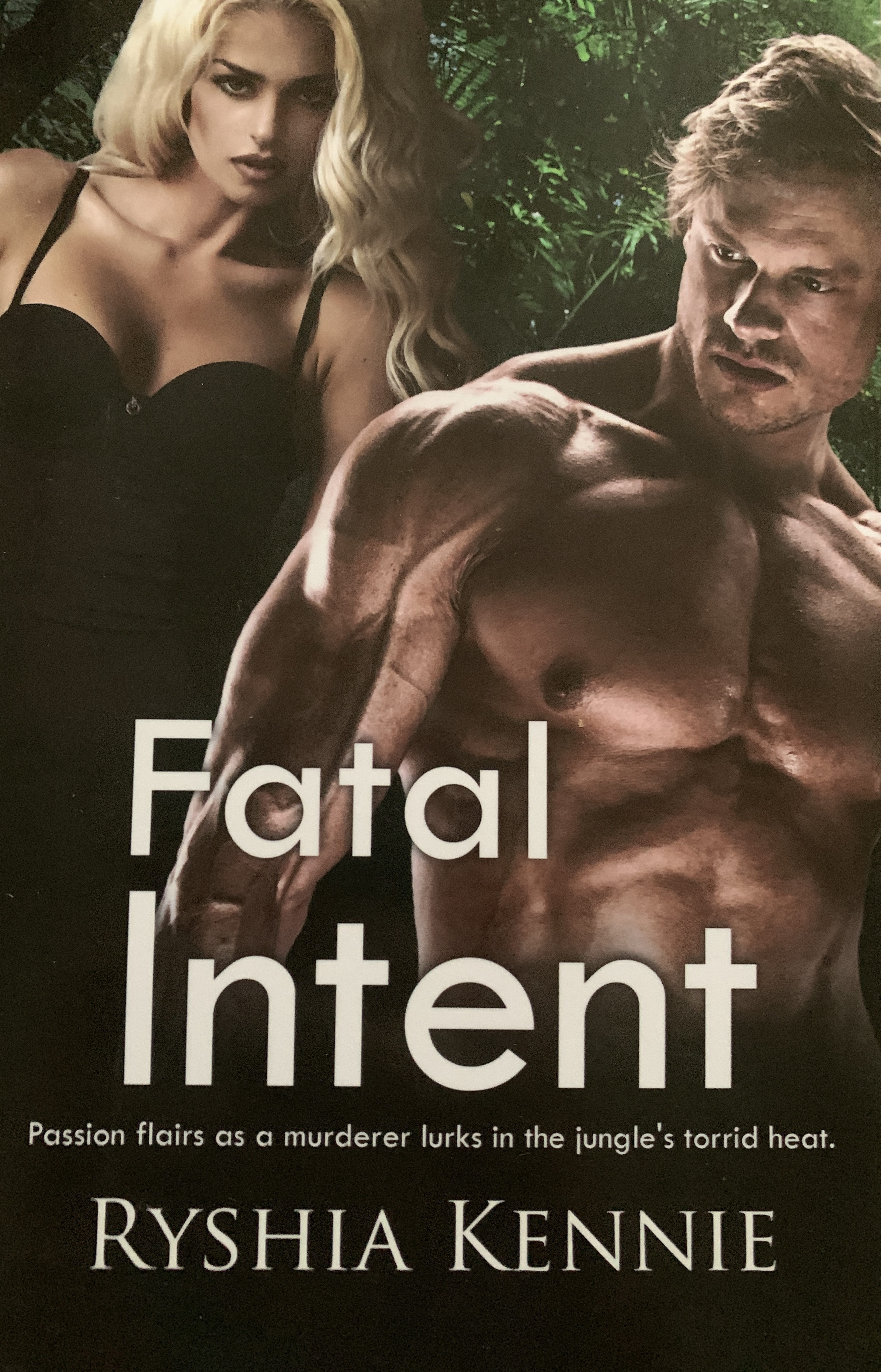 As passion flairs in the jungle’s torrid heat, a murderer lurks. And, in a battle of wits that puts lives on the edge, can anyone be trusted?

The inspiration for Fatal Intent was a trip into the Borneo rain forest where I hiked in with my pants tucked into my rubber boots – yes, the forest was that wet and there were that many little critters that might crawl into your boots. There were also warnings of pythons that could be high up in the tree line. There were monkeys screeching in the canopy. The place was alive with life. How could it not inspire a story?

Leading a scientific excursion into the Borneo rainforest is a dream for entomologist, Savannah Cole. But when her guide turns up headless, it becomes a nightmare as soon they are lost. So, when a half-naked man emerges from nowhere, running isn’t an option. They need help.

Raised in the lush cradle of the Borneo jungle, Aidan is as unconventional as the fact that he has no last name. And, as a PI, he can’t ignore the mystery surrounding this group. In a bid for answers, he leads them on a convoluted trek finding himself in a clash of wills with their alluring leader and answers that slide dangerously close to the tribe he loves and a danger that no one imagined. 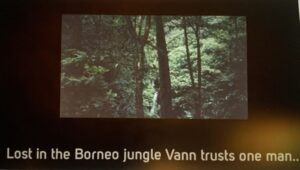 She saw him floating headless through a mist of tears.

Even the river’s roar was not enough to mask her scream, as overhead the Borneo midday sun skidded a brilliant reflection across the river’s surface.

Savannah Cole clapped her hand over her mouth and squinted against the bright sun, as if that would shift reality or change the fact that all that stood between Malcolm and anonymity was the San Diego Chargers logo on his torn, water-soaked T-shirt.  Instead, tears washed her vision.

Malcolm’s smiling face-his smiling, missing face. She choked and her foot slipped, bringing her dangerously close to the riverbank and the body.

Brush crackled and something screeched. The sound was harsh and loud even in a place where there was never silence. It would have sent chills through the uninitiated, but it was only an insect, an oversize bug. An insect that might not be classified or identified. There were so many and that was what brought her here. But now her guide was dead, headless. That thought alone was preposterous, even when the evidence lay in front of her. She wanted to weep. She wanted to run. But it was up to her to get her team out of here. She needed another focus before panic clouded everything. And then she caught sight of Ian spewing into the tall grass that grew wild and untamed on the edge of the clearing.

It was only the two of them—for now. She and Ian, who was all about screams and hysteria in a crisis. But there’d never been a need to worry about that—there was no crisis, there should have never been a crisis.

Her fingers trembled and she clenched them into her palms, nails pinching the skin.

There was no answer as Ian began to cry in large gulping sobs.

“Ian!” she shouted, trying to use tough love, hoping that would bring him back from the edge. There was no time for sympathy and neither of them could afford hysteria. They had to survive.

“C’mon, Ian,” she muttered, swallowing her own bile as it crept up the back of her throat.

Only yesterday morning she had laughed with Malcolm. It had been over some inane joke one of the other Iban had told him. Something that related back to his heritage and the Iban’s history as headhunters.

“Headhunters,” she whispered. “Don’t be ridiculous.”

There were no headhunters, not anymore. Just tribal people who took great pride in a history that once had included headhunting. Once, she reminded herself, no more. Her gaze flitted back to the corpse, the corpse that was minus a head.

I’ll be back before dark. Keep to the river. I’ll find you.

The last words Malcolm had spoken, at least to them.

Keep to the river. 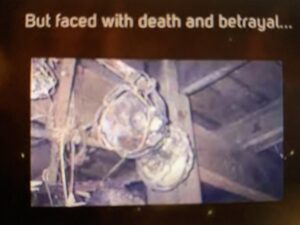 Savannah and her team had kept to the river as instructed. They’d followed that trajectory until it began to get dark. But he hadn’t returned. Now, here he was, one day later, headless. She almost gagged at the thought except she needed to remain strong.

She remembered her father’s words: “There’s money to be had in the jungle and as a result, it breeds violence and greed. Money does strange things to men. Don’t trust anyone.

Savannah knew that her father, a member of the university board that funded her expedition, had been referring to the resources being stripped from the tropical rainforest. Stripped legally and illegally, with no thought to anything but money. What had Malcolm stumbled on? For she was sure that’s why he had died—why else? And where were his killers now?

“It could be an accident,” she whispered and despite what she believed, she prayed it was.

The body shifted and broke free of the bank.

She raced to the river. Everything seemed to move in slow motion. Then, she was wrestling from the water what had once been a man. She clutched the waterlogged T-shirt, reluctant to touch the water-pulverized skin for fear of what she might take away. For fear that the skin would slough off, leaving raw meat, leaving…

She closed her mind, clutched the material, prayed it would hold, and pulled. The San Diego Chargers logo on the T-shirt, which he’d bartered from Sid only the other day, ripped down the middle. She sucked in air and touched flesh. His arm felt normal, just cold. Then maybe her foot slipped or maybe it was all too much. Whatever it was, one minute she was standing and the next she was flat on her butt. The body was now partway out of the water but still lifting in the current. It looked as if, at any moment, it would break free and head downriver.

She looked across the rushing water to the undisturbed forest. She refused to look at what lay at her feet.

Even though he lived in the city, in Kuching, he was so proud of his tribe—the tribe of former headhunters. He had claimed that a hundred-year-old skull still hung in his tribe’s longhouse. The last man hunted. Or was it? Somewhere in the depths of this forest was Malcolm’s head. Or maybe—she covered her mouth with her hand, the thought too horrible to contemplate. She thought it anyway… that it was at the bottom of this river.

She remembered something else, another quote of her father’s: “Things can get deadly out there. Expedition of ’72 we lost a member of the group. It was horrible. He was missing parts of his body. He was…” He had dragged the last bit out, leaving her in a strange mockery of suspense.

“His head. We assumed a monitor got him.”

She dropped her head in her hands.

A woman has never led an expedition.

Not possible, not at her age.

“Where do we go from here?” the slight man asked the woman. “Do you think that way?” he pointed.

“Don’t be utterly ridiculous,” another man said as he emerged from the brush and into the small clearing. His voice was full of disdain. “We go that way. “

Aidan watched, surprised as the group turned and as a unit moved east, towing what was obviously a body behind them.

For the love of Mike! They were making more noise than a pipe band.

“Stop!” His command was involuntary, he hadn’t meant to reveal himself yet. But he couldn’t stand it. They were inordinately incompetent, and it was apparent that they needed help. From what he had seen so far, they were innocents abroad.

The village—unbelievable, they were nowhere near there. They’d never get to the village before dark, not the way they were going. They were too far away, unless they had a boat. He took another look at the group and shook his head. He glanced at the stretcher and again wondered what had happened to their guide.

Aidan moved vines back, exposing his face. They only had to look in his direction.

He was so close he could have reached out and touched her. She was delicate, out of place here in the midst of this wilderness. Her skin, even beneath the sweat and exertion-stained flush, was fair. She wasn’t built to be here, she was too slight to survive, too weak, too…

She glanced up. A frown immediately seared her face.

“Who the hell are you?” she snarled.

What Readers are saying:

Wow! Fatal Intent is a spectacular romantic suspense by Ryshia Kennie. Ms. Kennie has scored bonus points with this fantastic story. This book is well-written and has a stellar cast of characters. …Aidan and Savannah’s story is cover to cover drama, humor, spice, action and edge of your seat SUSPENSE.   Deb D

A suspenseful story filled with twists and turns. There is murder, poaching, and betrayal with a side of romance. …. Teresa R

It’s hot in the rainforest of Borneo! Action-packed and steamy suspense follow ‘a man who danced between two worlds and a beautiful blonde bug hunter when her expedition goes awry. …This is a can’t miss read!   Valeri29

99 Cents – Don’t miss out:  Click here to get your copy of Fatal Intent!