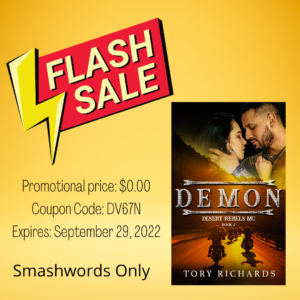 Book one, Cole, is already free. Now pick up a copy of book two! Smashwords only.
Demon – He’s a known womanizer and a man with secrets, but he runs Desert Rebels with an iron fist. He had an old lady once, and he doesn’t want another one. A spirited little club girl catches his eye, but fear of commitment forces him to push her away. Trouble and betrayal in the MC brings them back together, leaving him with a decision to make–either trust her and claim her, or send her away for good.
Bobbie – She’s a club girl whose purpose is to satisfy the men, but there’s only one man she wants–the president of Desert Rebels. He avoids her until the pain of seeing him with every other woman causes her to leave. But leaving doesn’t keep her from getting into trouble with the club, and soon she’s right back where she started. Distrust and betrayal comes between them, but Bobbie’s determined to prove to Demon that she can be the old lady that he needs.