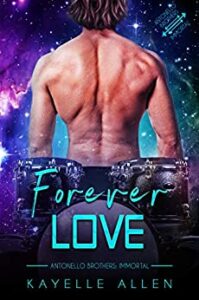 For their love, forever won’t be long enough.

Izzorah has always been a Kin, part of a human-like race of fierce, rugged felines. Now he’s a brand-new immortal too.

When he learns the truth about his fiancé’s immortality–and his own–the familiar world he knew vanishes. He must pass a test designed by the immortal king to reveal his gifts and weaknesses.

Pass and he’s accepted into a warrior society he wants no part of. Fail and he’s cast out, away from the man he loves.
As if that’s not bad enough, his lover is also the king’s ex, and the king refuses to part with anything–or anyone–he loves.
Fair test? Not in this immortal lifetime…

♥Forever Love, a hot MM Sci-Fi romance, reveals the immortals’ secret role-playing game known as Peril. Join Izzorah on a desperate quest to prove his worth. A GameLIT / LitRPG story.