Friends with Benefits by Anne Lange 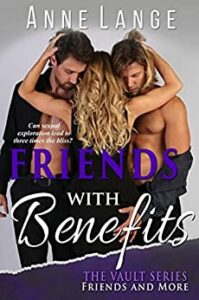 Can sexual exploration lead to three times the bliss?

Connor can’t believe it when his best friend asks him to seduce his wife. Then he meets Angela, and all the women in his past fade away. With Tyler’s blessing, Connor sets out to melt Angela’s reserve, and when Tyler joins the party, the three of them set the sheets on fire.

Angela is floored when her husband suggests they explore some of her fantasies—things she’d only read about but never in a million years thought she’d actually do. Sandwiched between Tyler and Connor, she’s never felt so treasured, so protected, so loved. But the reality proves much more complicated than the fantasy. She loves her husband, but she finds herself falling for his best friend too. That’s not normal, is it? What will people think?

Author’s Note: This book was first published under another cover and publisher in 2017. Rights have been returned to the author. It is being republished directly through the author’s publishing company hotRom publishing, however, no substantive changes have been made since its orginal release. This book is written for a mature audience. It contains sexually explicit content and some profanity.

‹ The Tuscan Secret by Angela Petch › Under Fire By Zoe Normandie