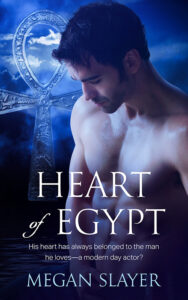 His heart has always belonged to the man he loves—a modern-day actor?

Thutmose knew from the moment he purchased the six-carat ruby that he had something special. So much so, he refused to turn the gem over to the Pharaoh. His punishment for his disobedience? Death and a curse. He shall wear the Heart of Egypt for eternity.

Aiden Cory, star of the show Hunters, has no idea he’s stumbled on a mummy or the chance at finding true love. When he meets Thut, he’s head-over-heels. He doesn’t know about the Heart of Egypt, but he knows he’s attracted to Thut. There’s the minor problem of Thut being a mummy.

Can modern love save Thut from an ancient curse?

“The gift of this ruby is the gift of eternal love,” the merchant said. “Use and give of it wisely.”

Thutmose held the ruby and measured the weight in his hand. The large gem seemed so heavy against his skin, and so dark red. The color reminded him of blood. Of the deep connection between souls. He needed this ruby. “I shall have it.”

“The price is steep,” the merchant said. “You will pay with your life.”

Pay with his life…every peddler thought he could use that line as a threat because of Thutmose’s wealth. He wasn’t scared of curses or prices. He’d made quite the nice fortune for himself through his dealings with the Pharaoh and his land holdings. The price of this gem wasn’t out of his reach. “I shall have it.”

“Very well.” The merchant accepted Thutmose’s payment and bowed. “The gem is yours. Guard it with your life.”

What an odd thing to say. Thutmose wrapped the gem in a scrap of cloth, then tucked the bundle in the pouch he kept on a strip of leather around his neck. He nodded to the peddler before the man left his home.

Thutmose left his couch and strode to the window. The gem weighed heavy around his neck, but also felt like a part of him now. Like he’d never been without it.

His lover, Azizi, stood beside him and slid his arm around Thutmose’s waist. “My beloved.”

He embraced Azizi. “How was your rest?”

“Not well.” Worry lines crinkled at the corners of Azizi’s eyes. “The Pharaoh knows about us.”

“So?” The Pharaoh had taken a great many lovers. What did Thutmose’s love life matter to one so great?

“He has demanded your presence.” Azizi trembled. “And mine.”

“We will see him.” He didn’t understand Azizi’s hesitance. “Is there something you’re not telling me?”

Azizi balled his hands on Thutmose’s chest. “The Pharaoh has demanded a price for us to stay together.”

“He has our allegiance.” Didn’t he? “Have you lost faith in the Pharaoh?”

“I have not.” Azizi hesitated again. “The Pharaoh believes we have upset the gods, therefore have upset him.”

“I know not.” Azizi touched the leather pouch. “Did you bring me a gift?”

“Not this time.” He wasn’t sure what he’d do with the precious gem, but he wasn’t ready to give it away. Did Azizi deserve such an expensive present? Thutmose wasn’t sure.

“You bought the gem,” Azizi said. “Is it as brilliant as I’m told?”

Why was Azizi so interested in the ruby? “It is.”

“You should give it as an offering to the Pharaoh. Maybe he will smile on us and allow us to be together,” Azizi said. “Maybe he will allow us into his personal confidences and we can attain a spot in the kingdom.”

“Is that what you want? For me to pay for us to be together?” He shouldn’t have to bribe the Pharaoh this way. Besides, the Pharaoh would never allow Azizi into the realm of the aristocracy, even through his connection to Thutmose—unless Azizi knew something more than he’d let on.

“The Pharaoh believes we should give him an offering.” Azizi let go of him. “Don’t you care about me? Enough to give up your precious gem? Will you help me become part of the inner circle? Or will you prevent me because…”

Thutmose paused. Did he? He didn’t want to give the ruby to anyone—not to buy the Pharaoh’s favor or to keep Azizi in his life. He wanted to be happy. To do that, he needed to get to the bottom of this. He didn’t understand what he’d done to upset the Pharaoh or to cause this problem. He served the Pharaoh diligently and never spoke out against the gods. Then again, he wasn’t sure what had brought on Azizi’s interest in becoming part of the aristocracy. Did he ever really love Thutmose? Was his association with Thutmose there only to improve his position in society? To get him closer to the Pharaoh? Thutmose hated having doubts, but he didn’t trust his lover. Not now.

“We shall see him today.” He’d get the situation handled once and for all.

“Very good, my beloved.” Azizi smiled, but the fear didn’t leave his eyes.

Thutmose never wanted to see his lover upset. He’d waited so long to find Azizi and refused to let anyone, even the Pharaoh, take him away. According to whisperings around the kingdom, the Pharaoh had many lovers of both sexes. Did he want another lover? Or did Azizi want something of the Pharaoh? That wouldn’t surprise Thutmose. Many of the workers and low born did anything possible to gain the favor of the kingdom.

The Pharaoh couldn’t have Azizi—not yet. But the conversation did irritate Thutmose. Why was Azizi so interested in the gem, too? What did he want with the ruby? He hated to wonder about his lover, but he’d learned so many others couldn’t be trusted. He didn’t want Azizi to be like them, but right now…he wasn’t sure.

Thutmose let go of his lover and gestured to his servants to leave. He and Azizi would speak to the Pharaoh at once and clear up this problem. The faster they did, the sooner they could get on with their lives.

Megan Slayer, aka Wendi Zwaduk, is a multi-published, award-winning author of more than one-hundred short stories and novels. She’s been writing since 2008 and published since 2009. Her stories range from the contemporary and paranormal to LGBTQ and BDSM themes. No matter what the length, her works are always hot, but with a lot of heart. She enjoys giving her characters a second chance at love, no matter what the form. She’s been the runner up in the Kink Category at Love Romances Café as well as nominated at the LRC for best author, best contemporary, best ménage and best anthology. Her books have made it to the bestseller lists on Amazon.com.

When she’s not writing, Megan spends time with her husband and son as well as three dogs and three cats. She enjoys art, music, and racing, but football is her sport of choice.

Find out more about Megan on her website, and sign up for the newsletter here. You can also check out her Blog, Amazon Author Page, Bookbub, and Instagram.