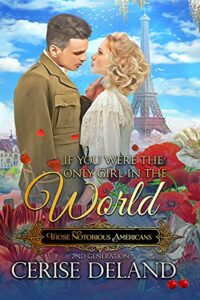 One starlit night, he saved her from tragedy and she saved him from disaster.

Years later, on a moonless night, he rescues her again—and they discover a love affair they cannot resist.

Now during the nightmare of war, each must decide if they’ll abandon all they worked for to claim the only person in the world they could love.

Katrina Schubert rejected what her father’s millions could buy—a title, a castle, a man who’d marry her for her money. Instead, she wanted to use her intellect and become a doctor.

Nathaniel, the Earl of Carbury, didn’t want what his family insisted he needed—a good woman who proved to him how beneficial a loving partner could be.

But one starless night in war-torn London, Nate saves Katrina from tragedy, the same way years before, she’d saved him from disaster. What began as friendship turns to a love affair they can’t resist.
Dare they risk their hearts to take all the riches enchantment can bring them?
Or will they reject the possibility that each remains alone, remembering the only other person they could adore?

If you love swoon-worthy historical romance, starring endearing heroes, sassy heroines and a family of irresistible charmers, this book is for you! IF YOU WERE THE ONLY GIRL IN THE WORLD to begin your journey!

IF YOU WERE THE ONLY GIRL IN THE WORLD the sixth book in THOSE NOTORIOUS AMERICANS series but can also be read as a standalone novel.

Book 1: Wild Lily (Lily and Julian)
Book 2: Daring Widow (Marianne and Remy)
Book 3: Sweet Siren (Liv and Killian)
Book 4: Scandalous Heiress (Ada and Victor)
Book 5: Ravishing Camille (Camille and Pierce)
Book 6: If You Were the Only Girl in the World (Katrina and Nate)
Book 7: Let Me Call You Sweetheart (Chantal and Dylan)

‹ Midnight Son by Barbara Dunlop › Was Life Better Before Women Could Vote?