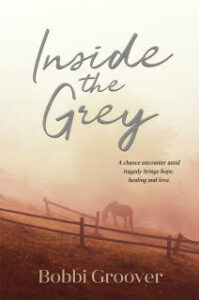 Brayden Wakefield is quickly losing faith that the encroaching hostilities will end peaceably.  He and his neighbors, Fletcher Stedman and Royce Carlyle, seem to be in the minority in their belief that the war would not end in a few months.  They sense any clash would be long and brutal.  But their loyalty to one another supplants their reluctance, and they are drawn into the politics and atrocities to save their kidnapped comrade, Caleb Jenkins. Nothing is as it seems, however.  The gentlemen, turned raiders, squirrel behind enemy lines.  Brayden uncovers lies and intrigue on both sides but as he and his fellow raiders execute their audacious plan, as they torch the layers of the conspiracy, Brayden finds love hidden among the ashes.

“…a gripping tale that had me completely captivated…Its twists and turns would be worthy of any lover of this genre.” Bernadette Diane Anderson for Readers’ Favorite.

Inside the Grey is available for purchase from:

And is also available in e-book format from: