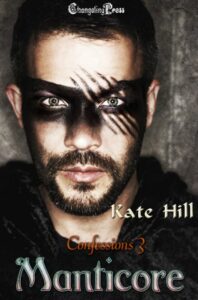 Martin: I was an outcast. Humiliated and abused, I ran away to carve out a life apart from the Specter family business. Convinced the family magic would never work for me, I was taken by surprise when I met him.

Manticore: Shunned by other manifestations, I lived alone and nameless. Then I found Martin. He gave me a name and his body. Now, we exist as one. We never expected to find a woman who’ll love us, but Daisy Fay is full of surprises. We’ve walked through demonic fire to protect her, and we will have her as our mate.

Daisy Fay: Martin is the sweetest guy I know. Manticore is an enticing beast. I never dreamed they shared a body. It’s a good thing I love them both. We’re in constant danger, though, because their father wants to kill them. They want to keep me safe, but sitting in the sidelines isn’t my style, and they’d better get used to it.

“Oh look. A party.” Manticore steps into the shop, grinning from ear-to-ear and exposing his razor-like teeth. His catlike face, enhanced by black and gray makeup, is a strange contrast to his classy black suit and pale gray tie.

“Get him!” growls a horned demon.

“I love a warm welcome.” Manticore leaps, catlike, and meets his foe in mid-air. They drop to the ground and roll before Manticore pins him and rips out his throat with his teeth. Blood splatters his face and clothes. By now he, too, looks demonic. He jumps into the fight, ripping apart the gang members while Brandy finishes off the demon she’s fighting. I rush to the door, close it, and whisper what I hope are stronger protective spells.

“Well, that was fun.” Manticore grins. He glances at the front of his torn, bloody suit. “This was one of my favorites. Oh well. And how are you ladies tonight?”

“I don’t know who the hell you are, but you have great timing,” Brandy says.

“Ah. You must be the charming Miss Brandy.” He turns his cocky grin to her. “I’m Manticore. It’s always a pleasure to meet my employees.” He offers his gore-covered hand, but Brandy won’t take it.

Instead, she points down the little hallway behind the counter. “The restroom is that way.”

“Forgive me. I forget that humans are always a little squeamish regarding the hunt.” He tugs a handkerchief from his pocket and wipes his hands. His gaze fixes on me, and my heartbeat quickens. His eyes are startlingly beautiful–almost like Martin’s, except there’s a wildness to Manticore that Martin could never have. I truly like Martin, but Manticore does things to my libido, even though I hate to admit it. He steps toward me, his smile fading slightly. “The lovely Daisy Fay. So we meet again.”

He touches the side of his nose. “I smell trouble. Call it a gift. Since I’m here, I think I’ll have a look at my library. Care to join me, Daisy Fay?”

“Not until we get this mess cleaned up.”

“I’ve got it.” Brandy waves her hand. “These guys aren’t going anywhere now. I’ll contact headquarters and get a cleanup crew over here.”

“I’m not leaving you with this, Brandy,” I tell her.

“Please. It’ll give me some time to get my head together. By the way, where’s Martin?”

Brandy sighs. “That was probably a good idea.”

“A very good idea.” Manticore raises an eyebrow in my direction. “Shall we?”

“Clean yourself up first. Meet me downstairs.” I turn away from him, ignoring the way his gaze burns into my back. 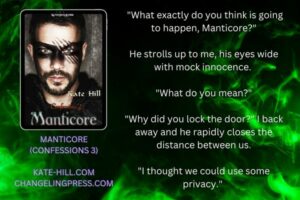 On the way to the library, I try to calm myself. Glancing at my shaking hands, I curse softly. I’m not emotional because of the fight, but from seeing Manticore again. The way he looks at me and the way I feel about him is a dangerous combination.

I sit at the table Martin and I had been sharing and call him. I need to know that he’s all right. It’s a dangerous city, and even though he took the secret passage, other demons might be lurking in the area, waiting for an easy target.

Moments later, I receive a text back.

I’m okay. Worried about you, though. Glad Manticore showed up when he did. Talk to you later.

My brow furrows. That was short and to the point. Martin is usually a bit warmer in his texts, but he’s probably still a little shaken up, too.

“Ah, Daisy Fay.” Manticore steps into the library and my jaw drops. He’s discarded his bloody jacket, shirt, and tie. Half-naked, he strides toward me. His trousers are belted at his narrow waist. He’s not tall or big, but he has a wiry strength that reminds me of a wild animal, like a hungry cheetah on the prowl. The black, white, and gray makeup still covers his face, but the sprays of blood are gone. Strange. Does he carry a touch-up kit with him? Why not? After all, his family made its fortune selling beauty products, and they still make a profit even since the demon occupation.

He closes the door behind him and locks it. Then he turns, one long, sleekly-muscled arm still stretched in the direction of the door and an almost playful smile on his lips. “Alone at last.”

I’m torn between anticipation and annoyance. “What exactly do you think is going to happen, Manticore?”

He strolls up to me, his eyes wide with mock innocence. “What do you mean?”

“Why did you lock the door?” I back away and he rapidly closes the distance between us.

Kate Hill is a vegetarian New Englander who loves writing romantic fantasies. When she’s not working on her books, Kate enjoys reading, working out, watching horror movies, and researching vampires and Viking history. She runs the Compelling Beasts Blog that is dedicated to antagonists, antiheroes, and paranormal creatures. Kate also writes as Saloni Quinby.

Holly Hewson: Kate, thanks for chatting with us at TRS. Please tell us about your latest release, Manticore.
Kate: Manticore is the third book in my Confessions series that’s part of the Pandemonium universe. It’s a futuristic paranormal romance in which demons have taken over the world. The witch Daisy Fay has strong feelings for a sweet witch named Martin and an irreverent beast named Manticore. She has no idea that they share a body.
HH: What can you tell us about the trio at the center of this story?
Kate: Martin and Daisy Fay are witches. Martin is also head of the Specter family business and coven that has existed since medieval times. His family has a specific kind of magic that allows them to bond with supernatural beings called manifestations. Manticore and Martin were outcasts, but since merging, they’ve both gained power they hadn’t thought possible. Daisy Fay is employed by them in a secret library they’ve created to protect magical books and artifacts against the demons who have taken over the world. Martin and Manticore share a body, but they’re as different as two men can be. They love each other, but they’re in constant battle with each other. Luckily, Daisy Fay knows how to handle both.
HH: What can you tell us about their world?
Kate: It’s a dangerous, violent place where demons rule. Manticore has a vicious, wild side, and he thrives in such a world. Paranormal creatures and humans have banded together and formed a rebellion against the demon masters. Everyone lives in constant danger.
HH: This is part of your Confessions series at Changeling Press. What can you tell us about the first two stories?
Kate: Snake Charmer and Bloodbloom are the first two stories in the series. Snake Charmer is about a dancer out for revenge and a rogue werewolf who’s part of the rebellion against the demon masters. Bloodbloom is about two vampires–a warrior and a former prostitute–who met in the past and after a long separation still desire each other.
HH: Will there be more in the Confessions series?
Manticore is the last story in the Confessions series. I plan to write more set in the Pandemonium world as indie books.
HH: What are your plans for 2023?
Kate: I’m working on re-releasing my Ancient Blood series and also my historical romance Captain’s Mercy. I’m nearly finished with the sequel to it called Warrior’s Grace. I’m also working on Sofia’s Silver Bullet which is set in the Pandemonium universe.
HH: Who have been your biggest inspirations in your writing?
Kate: So many different things inspire me to write. It could be a place, an object, a person. Just about anything.
HH: You write in many genres/subgenres. Which is your favorite?
Kate: I love romance with elements of horror and the paranormal.
HH: What are you working on at the moment?
Kate: I’m currently working on Warrior’s Grace and Sofia’s Silver Bullet. One is a historical romance and the other an erotic paranormal romance.
HH: What are you reading right now?
Kate: I’m currently reading The Audacity by Carmen Loup and King of Midnight by Tasha Black.