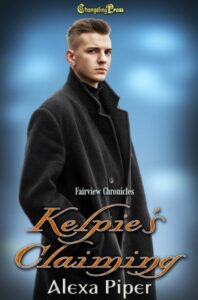 Rob’s current goal in life? Do not eat people. That’s easier said than done when you’re a kelpie in the service industry. While Rob pursues his goals from behind the bar, a stranger walks in, and Rob catches the man’s scent. Yet, patrons are not for eating, and it should have ended there… except when Rob smells that delicious scent again, the beautiful stranger needs help.

Bertrand wants to fit in, but because he’s part Fae, part Elf, and grew up human, he’s not really at home in either human or supernatural society. Still, he likes being a reporter and following a story all the way to its conclusion. The story he’s pursuing when he walks into Rob’s bar one night is one of supernaturals going missing, and Bertrand seems to be the only one who cares.

Meeting Bertrand might just shift Rob’s life goals. Coming face-to-face with a kelpie stallion might be enough to help Bertrand see where he fits in perfectly. Except Bertrand doesn’t really know what to make of Rob, and also, Bertrand’s missing persons story is bigger than even he envisioned. It’s turning into a case of abduction and trafficking he needs to unravel before he can even think about Rob’s advances. The story will lead Bertrand to some dark places before the year is out.

‹ Under Fire By Zoe Normandie › Flame and Fury by Michelle Miles