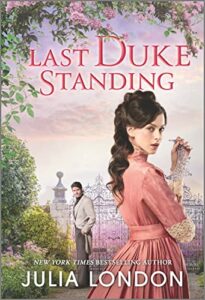 Fans of Bridgerton will love this sparkling, witty, and sexy new series from New York Times bestselling author Julia London! With a young future queen in the market for a husband, and the charming—and opinionated—Scottish lord tasked to introduce her to the ton’s most eligible bachelors.

When Crown Princess Justine of Wesloria is sent to England to learn the ropes of royalty, she falls under the tutelage of none other than Queen Victoria herself. Justine’s also in the market for a proper husband—one fit to marry the future queen of Wesloria.

Because he knows simply everyone, William, Lord Douglas (the notoriously rakish heir to the Duke of Hamilton seat in Scotland, and decidedly not husband material), is on hand as an escort of sorts. William has been recruited to keep an eye on the royal matchmaker for the Weslorian prime minister, tasked to ensure the princess is matched with a man of quality…and one who will be sympathetic to the prime minister’s views.

As William and Justine are forced to scrutinize an endless parade of England’s best bachelors, they become friends. But when the crowd of potential grooms is steadily culled, what if William is the last bachelor standing?