Legacy of Fear by Ryshia Kennie 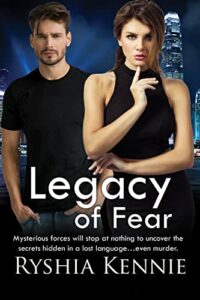 Andra Vandersan is an expert code breaker, as fiercely independent and beautiful as she is brilliant. Working in Hong Kong at the highest levels of deciphering. When her next-door neighbor is brutally murdered in a way that suggests the work of the Chinese triads, two things become clear: Andra was the intended target of the hit, and the assassin is going to return.

Max True is a world-class linguist, a colleague of Andra’s who once helped her break a code that would destroy a terrorist cell. When he shows up at Andra’s door with a mysterious message, they realize they may have stumbled on a long-lost women’s language that holds the secret to incredible power—and one that the most vicious men in Hong Kong will stop at nothing to get their hands on.

As Andra and Max work to solve the puzzle of the language, they find themselves in a desperate race against time to escape the mysterious forces who all want the secret of the message—even as they surrender to the forces of an undeniable passion that brings them inexorably and irrevocably together.

The Wolf in Mine by Paige Tyler