Light Up the Night by PG Forte 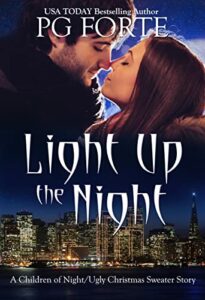 Her love will light up his night. If they can both survive that long.

Heather is having the worst Christmas ever! Or, at least, the worst Christmas since she was forced to become a vampire. Her sire’s distracted, her nestmates have forgotten her, weirdos have taken over the lair. The only bright spot in her life right now is Drew–who didn’t even used to like her! She knows he’s fond of her now, but that’s not good enough. She wants more. She wants everything. She wants him. And she’s not giving up.

Drew Geiger gave up on love a long time ago. Such tender emotions have no place in a vampire’s heart. But, somehow, the girl he once described as a “feral kitten” has got her claws in him, and she’s not letting go. That would be fine, if only someone didn’t want her dead–and if her sire didn’t recall that it was Drew who once suggested that maybe she’d be better off that way.

“Who can resist the emotional whirlwind of PG Forte’s vampire world, hidden among ours? I once described this gorgeous, fighting, striving, loving clan as vampire soap opera. Irresistible!”
“PG Forte’s Light Up the Night is connected to her Children of the Night series, but stands well alone. Heather and Drew are eons apart in terms of experiences life lived but the heart knows what it wants….”
Excerpt
Buy it today!