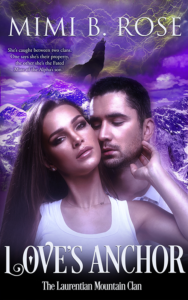 She’s caught between two clans. One says she’s their property—the other that she’s the Fated Mate of the Alpha’s son.

After hiding from shifters all her life, Mirabelle Beauchamp finds herself caught in a deadly rivalry between two clans. When sexy Alpha’s son Maxime Ducharme helps her fend off a shifter attack, she’s thrown into the world her mother had shielded her from. Maxime’s rivals return, claiming Mirabelle is one of them, but she knows she belongs to Maxime and Maxime belongs to her.

They’ll both have to fight for what they want. For the freedom to choose—and to love.

Publisher’s Note: This book is the prequel to Heart’s Ease, part of the Laurentian Mountain Clan series.

Mirabelle Beauchamp knelt by her husband’s gravestone in the small cemetery. The wind whisked the crisp autumn leaves in small eddies around her. She looked up, listening, and tensed for flight. Did I just hear a howl in the woods?

It didn’t sound like the local shifter clan. Probably a pack passing through the mountains on the way to their winter residence. Nothing to worry about.

She looked back at the gravestone and traced Jacques’ name on the marker.

“Three years,” she whispered. “Why did it end this way?” She wiped the tears from her cheeks and pulled her long coat around her middle.

Her friends in Montreal didn’t understand. They thought she should have buried her husband in the city. But her best memories of her husband came from this village in northern Québec. Their walks through the little streets, the dances at the parish hall. The times before things got bad.

She rested her head on Jacques’ gravestone, her shoulder-length brown bob falling over her face, shutting her off from the world.

“I’m trying to move on, but I can’t,” she whispered. “Damn you!” There was still a giant hole in her chest where her heart used to be. She wondered how it wasn’t visible from the outside.

The little town was her refuge these days. The villagers made it a point to check in on her. Pushing herself to become involved in the community eased the grief and anger a little.

“I’ve been trying to keep busy, but it’s not working. I’m spinning around with nothing to hang onto.”

A rustling noise came from behind her. Was it Madame LaFitte or Monsieur Blais? They often visited their loved ones in the little cemetery.

Mirabelle looked around. Nothing but the old-fashioned iron fence and worn-down gravestones. A crumbling grey statue of an angel surveyed the scene in the middle of the graveyard.

It must be a squirrel or a hare.

She roused herself and stood.

“Time to get back to the real world, J.” After giving one last pat to her husband’s gravestone, she walked through the path to the entrance.

At the cemetery gate, she heard a noise to her right. A tall man in a dark grey overcoat rushed towards her, looking behind him. He was nearly on top of her when he turned his head. Piercing grey eyes met her gaze.

He raised his hands. She reached out to stop him from crashing into her, but it was too late. Their fingers met—

…She fell down a hole. Or into a dream.

Mirabelle landed in the dark. Grass and earth below. Stars and trees above. In a clearing—people sang and danced in the firelight. Smoke and pine wafted to her nose.

A large, muscular arm reached down, grasped her hand and pulled her up from the ground. Two hands reached around her and held her close to a sculpted body.

She stared up into the dark eyes of a man she’d never seen before. But those eyes were familiar. Tall, broad shoulders, dark grey overcoat. No, not coat—furs. Long, dark hair was pulled into rough braids that begged to be stroked. Grey eyes, high cheekbones, kissable lips—he almost glowed in the bonfire light. He was hers. Wasn’t he?

She looked down and touched her linen smock, noting a dark wool shawl draped over her shoulders. Slippers hugged her feet, connecting her to the earth.

He pulled her into the circle, the other couples whirling around them. They stood still for a moment. Warmth and strength emanated from him, enveloping her. He leaned in to place his lips by her neck, his nose tickling her ear. She breathed him in—pine forests and earth, fur and leather and smoke.

The gorgeous man stepped back and grinned. He whirled her around, faster and faster.

They laughed together. She was dizzy and smiling and falling…

—At the cemetery entrance, Mirabelle came to, the ground cold beneath her. A tall handsome man held her head and shoulders. Backlit by the sun, his short dark hair set off a rugged face, high cheekbones and smooth olive skin. Hard, sinewy muscles flexed under his soft, tailored overcoat. Grey eyes held her gaze. She caught a hint of smoke and furs.

She was groggy. And lying down. And staring. And she wanted to stay lying down with this man above her or under her or anywhere he wanted to be.

“How—what happened?” she asked, reaching out towards his cheek.

“I bowled you over. I’m sorry,” he said in a deep baritone, the sound rumbling through his chest. His eyes pinned her with his intense gaze. She resisted the urge to slip her arms around his shoulders.

“Are you all right?” he asked, licking his lips.

“I don’t know.” She put her hands on either side of her on the ground. “I was walking along and—”

“I didn’t see you until it was too late. I thought I had a hold of you, but then you fell down.” He tried to help her sit up.

“Who—who are you?” She looked into his grey eyes and heard the echo of fiddles and laughing.

They both froze, half awake, caught in a spell, searching for something that was already slipping away.

When a wolf howled in the distance, the spell was broken. They both turned towards the treeline, which was several metres away.

This man—this promise of firelight and forest and passion—frowned and shook his head, peering into the woods. His powerful hands squeezed her shoulders for a moment, and he let out a low growl.

He turned back to her, his eyes now glowing yellow. Her own wolf answered back, a low rumble from deep inside her. Yes.

The vibrations met and coursed through them both in waves. When he pushed her back on the ground, she reached up and pulled his face towards hers. She had never felt this magnetic pull for someone—not even Jacques. When she sought his mouth with hers, heat rippled through her body.

Just as she melted into him, a crash sounded behind them. Six wolves loped out of the woods, howling and chuffing as they approached the couple on the ground.

The man sat back and shifted into a giant charcoal wolf. As Mirabelle transformed into her white wolf form, the pack circled around the two of them.

The biggest of the attackers advanced, snarling at the charcoal wolf. The grey wolf snapped at the mud-coloured fur, then pounced on the brown wolf.

Mirabelle was distracted by two smaller wolves barking at her. She approached them, teeth bared and growling. Lunging forward, she snapped at the flanks of one, while she tried to push the other with her back legs. They rolled over her as she bit and clawed, anger rising within her.

Her mother had kept her away from other shifters, but she had prepared Mirabelle to defend herself if needed. Mirabelle was not going to let these pups win. She bit an ear and scrambled until they whined and withdrew, panting.

The grey wolf howled. His opponent was down, blood dripping from its hind legs. A couple of wolves answered his call, but they sounded far away. Were they on the other side of the small town?

The brown wolves snarled and renewed their attack.

She felt a sharp pain on her side. She kept fighting, but there were too many of them.

The grey wolf appeared in front of her as another brown one advanced. He pushed the newcomer down and tore out his throat. It was vicious, but she felt only satisfaction seeing the blood gushing on the ground.

Two grey wolves ran into the clearing to join the fight. Circling, they snapped at the attackers. When one brown wolf ran off, the greys pounced on the remaining wolves. They joined in the fight until their foes were wounded and had limped off into the woods.

Mirabelle’s heart was pounding. She had avoided shifters all her life. Why did they find her here? Now? Am I in danger?

She remembered her mother’s stories of loups-garous—the French-Canadian werewolves. The European settlers in New France had spun fearful tales of outcasts turning to the devil and being punished by God. Shifters were sinners who needed punishment. Like Eve and the curse of childbirth. She knew it wasn’t true, but sometimes she felt she was being treated unfairly by the universe for something she didn’t choose.

She was woozy. Blood gushed from a slash on her flank. Shifting would heal the serious injuries. She sat down and concentrated, her bones and sinews transforming into human positions. It didn’t hurt, exactly, but it wasn’t a pleasant experience.

Back in her human form, Mirabelle knelt on the cold ground. Where had she left her clothes? The man who had fought with her against the other wolves appeared with his grey overcoat, gently wrapping it around her. She snuggled into it and started to shiver uncontrollably.

She could have sworn she heard him say it, but his lips hadn’t moved.

“Let’s have someone look at your wounds,” he said.

Mimi B. Rose writes fantastic tales filled with steamy enchantment and tender-hearted fulfilment to thrill strong women. As a teen she read V.C. Andews’s Flowers in the Attic and Anne Rice’s The Vampire Lestat and she was hooked on fantasy romance and paranormal romance. Some of her favourite tv shows are Sleepy Hollow, Grimm, and Once–and the reboot of Beauty and the Beast starring Kirstin Kreuk (does anyone remember that series?).

Mimi likes a sassy heroine who is independent but finds a strong hero who can keep up with her and treasure her for their uniqueness–including her flaws!