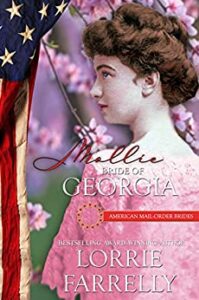 MOLLIE: BRIDE OF GEORGIA is fourth in the unprecedented 50-book AMERICAN MAIL-ORDER BRIDES series. Set in the last decade of the 19th century, MOLLIE is a story of courage and hope as a young woman, answering an advertisement for a mail-order bride, confronts an unknown and very challenging future.*

Years of brutal warfare have left the South with far more women than men. What, Mollie Winters worries, could be so wrong with Dr. Nicholas Avinger that he was forced to advertise for a wife?Despite her misgivings, Mollie takes a desperate leap of faith. Arriving in Atlanta with little more than a few pieces of clothing, two pairs of shoes, and the manuscript of her wildly melodramatic, romantic adventure novel, she prepares to start a new life with the attractive but irascible Dr. Avinger.* A haunted man who prefers animals to people, Nick Avinger has driven away more than one assistant, as well as his latest fiancée. Mollie Winters might just fill both bills, if only he didn’t want her so much. And if only he didn’t fear how much he would hurt her.

*This unforgettable novel, a 2016 READERS’ FAVORITE INTERNATIONAL BOOK AWARD WINNER by the author of TERMS OF SURRENDER and TIMELAPSE, is the emotional and riveting story of the healing power of love.

‹ The Perfect Seasoning by Stephanie Burke › Beautiful by Danielle Steel