My Other Half by Megan Slayer 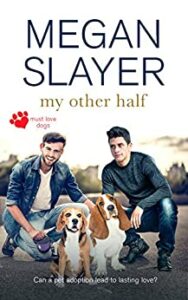 Book four in the Must Love Dogs series

Kelly Haas thought he’d lost everything when his first dog, Sally, passed away. He wasn’t looking for a new pup, but couldn’t resist checking the local rescues. One look at Louie and Kelly knew he’d found the right dog—a happy beagle. When Kelly meets the man running the rescue, he realizes he’s smitten with Rob, too.

Rob McMann isn’t the type of man to fall for a potential animal adopter, but he still believes in happy endings for the animals—and himself. Kelly isn’t like the other adopters. He knows how to get Rob, a perpetual loner, to come out of himself. He can be open with Kelly, but he leans on him hard when he hits a low time in his life.

Can these two find the love they deserve while raising four dogs, or are they destined to just be friends?