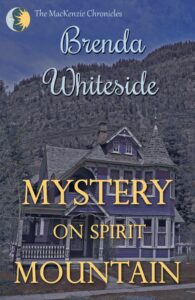 How open-minded are you? Years ago, standing with other parents in the lobby of a hotel waiting to be assigned a young Austrian boy who we would house for a week during a hockey tournament, I glanced over the group. A blue-eyed cutie stared at me, and our gazes locked. I had the wildest sensation I knew this child for eons. When they drew names, he was assigned to our home. Coincidence? I think not. We’ve been close friends from afar for decades. We always have been and always will be. The universe tells me so.

What if a man’s ability to sense the history of a house reveals his family’s connection to an unsolved murder?

I’ve always been captivated by what the sixties subculture tagged mind expansion. The concepts of déjà vu, aura reading, intuition, empathic visions or sensations, dream meanings, clairsentience, and other forms of communication—gaining knowledge outside common experience—fascinate me.

Only Harlan MacKenzie can sense the troubled history of the Big Purple House. When he’s hired to restore the historical mansion, he doesn’t foresee the secrets—secrets that entangle his family in deceit and murder.

There are people who apparently possess a sixth sense. Ordinary people who don’t consider themselves particularly gifted have moments of empathic enlightenment. Decades ago, when I lived in Germany, I had to go to the hospital for minor surgery. My mother, in Arizona, knew without being told. She called my husband to find out what was wrong with me.

After a stranger comes to town, weaving her web of deception, hell-bent on correcting an old grievance connected to the house, dark revelations of the past implode the present. Harlan and Phaedra are thrown on a dangerous path, not only risking love but possibly their lives.

The setting of my latest series is Joshua, Arizona, and is modeled after a real-life town called Jerome. This town hangs on the side of a mountain, roads stacked like stadium seating, with a view of the green valleys and red rock mesas miles away. I’ve been intrigued by this old mining town for decades. I combined that interest with my love of the mind-expanding concepts of the sixties to create The MacKenzie Chronicles. Book two, Mystery on Spirit Mountain, releases on September 15, 2021. The eBook is sale-priced for preorders and will return to regular pricing when it releases.

Living in present-day Joshua, Arizona, an 1800s mining town, turned ghost town, turned hippie haven, and now a tourist destination, clinging to the side of Spirit Mountain, the MacKenzie family saga unfolds in each book. Although not the main theme of the series, their mystical tendencies, and their openness to accept what can’t be explained helps to solve mysteries and adds to the suspense.

Have you had any other-worldly experiences? Have you experienced déjà vu?

Excerpt from Mystery on Spirit Mountain (The MacKenzie Chronicles Book 2)

As soon as Harlan crossed the threshold, he was sheathed in a gray cloud. His calf muscles tensed with a message to walk away. His head spun. He braced himself against the wall until the dizziness passed. When the room quit spinning, he imagined giving himself over to the mood of his surroundings. His body hummed with sensuality as if teased by sexual temptation. He strolled farther into the room, his breathing shallow and fast. “What the—” A spike of anger knocked out all pleasant sensation. He wanted to lash out. At what? He gripped his tape measure, took two quick breaths, and rolled his shoulders. Find some control. He widened his eyes as if to see more clearly and pivoted in a circle. Four walls. A window looking out on the side yard of the house. I’m missing something. He rotated in a circle again. Four walls. No closet. His throat constricted.

As if in a fog, he squinted and found the door. In the hall, he inhaled, bent with hands on his knees, and closed his eyes. “Son of a bitch.”

Gradually, his heart rate normalized. He took slow steady breaths. He had no way to decipher the overload of impressions the downstairs closet, the stairwell, and now this room gave him. He righted. I have to find out. Whatever happened in this house he felt certain tied him to its past.

“Guess who I just ran into?” Phaedra asked him.

She snorted. “No. Nora the writer.”

“You know how you said something seems off about her? I ran into her in the hardware store. So, I engaged her in conversation. She doesn’t know about The Ravine. Who doesn’t know about The Ravine if you’ve done any research on Joshua? And why would a writer come to Joshua if she hadn’t done even preliminary research? She told me she carries books with her. In a case. Doesn’t everyone use the Internet now? Why would she carry actual books with her?”

Harlan rubbed the back of his neck. “She said something about a book her mom had. One chapter on Joshua and mining moguls.”

“And on that little information she takes off for Joshua? Where’s she from?”

“No reason. But wouldn’t a writer find out more about an area before just taking off and hoping she gets enough material when she gets there? And she bought tools at the hardware store. What’s she going to do, build a book?”

“Now that you question it, she mentioned driving around to find appropriate houses. But then she also told me about the book her mom had.” He ran a hand through his hair and huffed. “One more mystery connected to this house.” He glanced toward the bedrooms then across the ceiling as if he had X-ray vision and was mapping coordinates.

She shoved at his knee to bring his gaze back. Something bothered him. “What do you mean, Harlan? What’s wrong?”

“My ‘clear vision’ isn’t exactly working with me on this house.” He gestured quote marks. “A woman with purple eyes shows up asking questions. Purple eyes. Purple house.” He rubbed the back of his neck again. “The original owner’s maiden name is the same as my mother’s middle name. And one of the bedrooms doesn’t have a closet.”

She scooted closer and ran fingers along his arm, registering the nice biceps. Tense. “Hey, don’t get so distressed. You’ll do a great job even if the house isn’t disclosing its secrets.”

He canted toward her, slipping the arm she touched around her waist. “Thanks.”

Although not exactly a hug, his gesture caused a ripple across her breasts. She took a short breath to maintain her calm. “Maybe they didn’t put a closet in that room, and your mom’s middle name, although unusual, could be a coincidence. And you must be worrying about the house too much, because Miss Round-butt Writer—”

“Round-butt writer?” With a deep-throated chuckle, he hugged her.

“Yes, she has blue eyes, and if you’re seeing purple—”

“I’m not color blind.” He trailed a finger down the side of her face. A teasing smile tipped the corner of his lips. “Her eyes are purple.”

“Whatever.” She poked his arm the same way she’d done a million times when they were kids. “Yeah, well, I’m sure you noticed—”

His mouth covered hers as he looped his other arm around her.

You can connect with Brenda here:

She blogs and has guests: https://brendawhiteside.blogspot.com/