New Release by Tory Richards on 10/6! 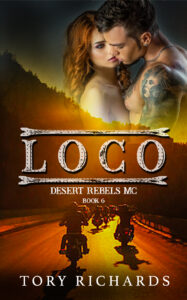 Known as the MC’s man-whore Loco wears the title proudly. He’s living the life, and has all the pussy he wants until a poolside goddess with copper hair and curves for days catches his eye. Their attraction is instant and off the charts and one night in Millie’s bed shows him that sex with the right woman could cure him of his roaming ways. Will he be able to change for her?

As soon as my eyes lit on the stunning redhead, I fucking wanted her. And when she cast those mesmerizing green eyes on me, I knew the attraction went both ways. She tried to hide it, but the color flushing her pretty round cheeks, and the way she parted those full, kissable lips as if she were surprised by her reaction to me, revealed the truth.

And being the man-whore that I was, my dick stood up and took notice.

I was suddenly glad that I’d accompanied Frenchie to see his new woman, Lissa. I’d barely taken the time to admire her obvious attributes, nor the tiny blonde sitting next to her. I couldn’t drag my fucking gaze off the curvy siren with them. She had tits that made my palms itch with the need to get a hold of them. My other hand clenched with the thought of grasping her by all that wild hair and then taking her mouth in a kiss that would stake my fucking claim.

I couldn’t believe the shit that was going through my head. I was the club man-whore, and I had a reputation to uphold. Club bitches were already complaining that my brothers were deserting them for permanent pussy, and I’d sworn it wasn’t going to happen to me. Nope. No way was I giving up free and easy pussy with no strings attached for any single woman. No matter how fucking enticing she was.

“Heard you were going to be spending some time at the pool,” I heard Frenchie say in his thick accent.

All at once I had three beautiful women looking at me. “Got a swim invite,” I added. A laugh burst out of the red-headed goddess before she could stifle it behind her hand.

I stared down at her, willing my dick to behave even though I knew that it was too fucking late. My eyes kept going back to the huge, beautiful tits spilling out of her top. “Got something to say, darlin’?”

I could tell that she was slightly embarrassed and shy. “I’m sorry, it’s just that you don’t look like you’re prepared to go swimming. I mean . . . ” Her voice trailed off as she gestured towards the clothes I was wearing with an up-and-down motion of her hand.

I looked her over with growing trepidation. Christ. It wasn’t new for me to want a woman as soon as I met her, but I couldn’t remember wanting to fuck one as badly as I wanted to fuck her. She was wearing shorts, and I wondered what she had on underneath them. A sexy thong tucked between the juicy cheeks of her ass, or something that left it to the imagination?

The silence reminded me that she was waiting for a response. “Darlin’, I’m always prepared.”