One Chance Only by Elysabeth Grace 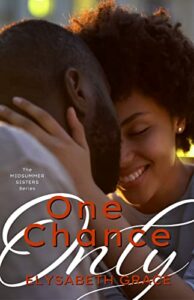 Dani Price doesn’t believe in friendship do-overs or second chances in love, especially when it comes to Jason Graywolf. He betrayed their friendship and unwittingly broke her heart, landing him on her never again list.

Except for that one weak moment. That one night.

A night in Jason’s arms was just an itch to be scratched, but three months of sleepless nights later, taunted by memories of his touch, confirm that fate wasn’t done with her yet.

Jason knows he’d made the mistake of his life when he let misplaced loyalty and jealousy come between him and Dani. He thought the past was behind the night she spent in his arms. He was wrong. Fate, however, wasn’t done with him yet.

With their matchmaking mothers taking control, Jason and Dani find themselves in the same place, at the same time, and with only one hotel room. For Jason, there’s no way he’s going to let this chance, perhaps his only chance, slip through his fingers…