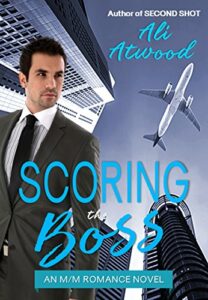 Scoring the Boss is a steamy, standalone novel, with no cliffhangers and a HEA ending.

Cody Madrid wasn’t born into privilege. He grew up in a trailer park and suffered a childhood from hell. The gritty start to life didn’t break him. It fired his determination to make something of himself. With discipline, hard work, and some unexpected luck, he founded Starwest Industries and built it into a multimillion-dollar empire.

Ben Jackson grew up in a loving family, enjoyed a picture-perfect childhood, and aspires to become a fine artist. He’s vacationing in Greece when he literally falls at Cody’s feet. Their meeting is electric, but forestalled when Ben receives tragic news from home. As a result, he puts his artistic ambitions on hold, and looks for a full-time job to help support his family.
When Ben is hired by Starwest Industries, he has no idea that Cody Madrid owns the company. Their professional relationship means Ben will be working closely with the most compelling man he’s ever met.

Though Cody is still closeted, he finds himself falling hard and fast for the blond, blue-eyed Ben. But Cody has issues to work on, and someone has a hold on Ben. He’s been trapped into living a lie that could ruin any chance of a future with Cody.