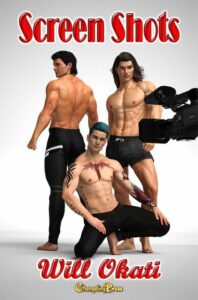 Seduced: TwentySomethingTwinks.com is nothing like Aaron thought it’d be. Professionally run and staffed by friendly, personable — and hot — talent, it’s a heck of a temptation — even for someone who’s never thought about getting down with a guy before. Trouble is, Aaron finds he likes the action more than he thought he would — and he’s starting to see Cody in an entirely different light.

Smolder: Brandon’s trying his best to play it cool. He figures if no one knows he’s a total amateur, he’ll go a lot further. He didn’t count on two of twentysomethingtwinks.com’s top studs claiming him for their own. When Gabriel and Dylan decide they want Brandon as their third in a permanent menage, all they have to do is convince him.

Slinky: Ross, the All-American “boy next door,” is a long established star of twentysomethingtwinks.com. He’s settled into his comfort zone — he needs shaking up and waking up. Maddox thinks he’s the perfect man for the job…

Submissive: Skyler, the newest recruit to twentysomethingtwinks.com, has one mission in mind: to get Thom, the cool, collected lead cameraman, naked and sweaty between the sheets. Skyler’s used to getting what he wants. So is Thom.

Sexology: Jake’s taken longer than a guy should to write his dissertation on the modern sex industry. He can’t stand the thought of leaving behind the friends he’s made at twentysomethingtwinks.com — and he won’t be able to live with himself if he doesn’t act on some of his favorite fantasies. Trouble is, he has no idea where to begin. A chance encounter and a night spent at the studio with a double handful of screen stars give Jake the chance to seize his dreams.

Ten men, ten ways to misbehave. It’s going to be a night to remember.

‹ His Pleasure Contract by Helen Walton › Whispers by Jayce Carter