SEAL with a Secret by Paige Tyler 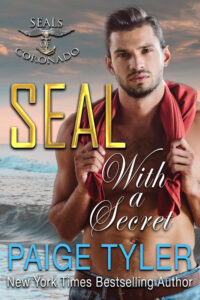 Secrets are his job.

Navy SEAL Lane Roberts is used to danger––but not from within his own SEAL Team. However, secretly dating his teammate Noah’s little sister Laurissa might put Lane in more jeopardy than walking into Afghanistan carrying only an American flag. Noah has a huge problem with his sister getting involved with a SEAL, and both he and Lane have a problem with political pawns infiltrating the ballet company where Laurissa performs. Living on the edge every day is part of Lane’s job but letting the woman he’s falling hard and fast for risk her life doesn’t sit well. How can he keep his mind on protecting a diplomat’s family and salvaging government secrets if he’s worried about keeping his own beautiful secret safe?

This secret is personal.

Laurissa Bradley has had her heart set on Lane Roberts for quite some time. But between his SEAL missions and her work dancing with the San Diego Ballet Company, they’ve had to postpone all their dates. But when Lane is assigned protect one of the foreign dancers, it throws him and Laurissa together every day––and thankfully, some nights. It also puts Laurissa in the deadly path of international espionage and the hired killers who will stop at nothing to gain access to the information being traded by a member of the dance troupe. But despite what Lane and her brother think, Laurissa isn’t the fragile flower they imagine. And she isn’t about to let her hunky new boyfriend be killed by some terrorist––not without a fight. Who says only SEALs can save the world?

“Paige Tyler is one of the best military romance writers that I’ve read. The military parts of her books read like a Tom Clancy novel, while the romance makes you want your own SEAL!” – Amazon Review

“A wonderful romance with danger, steam, wonderful characters, and a story to keep the pagers turning!” – Amazon Review

“I love the hunky SEAL, and little sister of his teammate trope. Another winner!” – Amazon Review

‹ On Common Ground by Mina Jane Madeley › After Hours on Milagro Street by Angelina M. Lopez