She Captures My Heart by Karen Kay 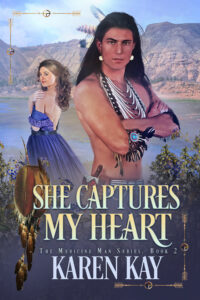 Amelia McIntosh was only fourteen when she fell in love with the young and handsome Gray Falcon of the Blackfoot Tribe. He’d helped her through a difficult time, and, for him in turn, she’d opened up a vital part of the medicine man’s world. Five years later, Amelia is still in love with the mesmerizing Gray Falcon, but her refusal to marry anyone but him has created a dangerous problem for her and her family.

When Amelia—the pesky little girl from Gray Falcon’s past—returns to the Northwest, he can’t help but notice she has blossomed into a beautiful, desirable woman — one who sets his heart aflame. Yet, he must resist her feminine charms because, though she is a friend, what she asks of him is against all Gray Falcon stands for as a medicine man.

United only in love, will love, alone, be enough to stave off a world threatening to pull them apart?

Warning: A sensuous romance that could a gal to capture the heart of her own true love.