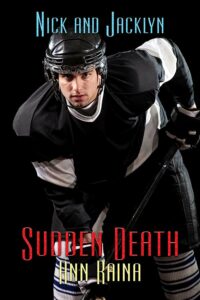 You can only have fun if others let you.

The serial killer’s intention seems clear—murder as many hockey players as possible and cripple the teams.

The FBI team is hunting a ghostlike murderer who doesn’t leave any traces. But then the attempted murder of hockey star Wright changes the direction of the investigation.

Anderson Wright just wants to play hockey, but a criminal kidnaps and tries to kill him while he’s vacationing with his girlfriend in the Monongahela National Forest. He survives due to FBI Agent Nicolas Hayes’s courageous actions that save his life. The motive and the resources of the attempted murder remain a mystery.

While the team of FBI agents investigate, three young and talented hockey players are brutally killed, just as they were on the cusp of starting great careers. Public pressure on the agents mounts as all hockey players and their crews fear that the killer will strike again. Still, the murderer leaves the crime scenes without tangible clues to his identity.

On a private level, Nicolas faces his mistress’s growing demands for their love life and has to decide whether to follow her kinky wishes or deny her desires.