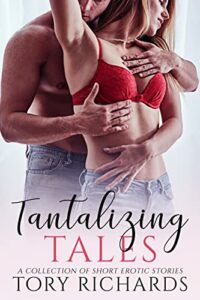 Obsession – She was his brother’s wife for twenty years but divorce opens the door for John and Sammy to act on their secret attraction to each other.
Hands-On – Ivy is willing to do anything to keep her thieving brother out of jail, including giving Jake, her ex, a weekend of anywhere, anytime sex.
Hers to Claim – Lilly gave Blake her virginity on her birthday and then he disappeared. Now he’s back for her brother’s wedding and it’s time for her to stake her claim.
One Night Only – Lana is turning fifty and what better way to celebrate than by spending a night with Joe, the younger, male dancer from the club she frequents?
Rapture – Abduction. Deception. A sick initiation. Not a very good way to start a new relationship except that Reid and Alexis have been attracted to each other for several months. *This story can still be purchased as a single book.

‹ Wings by Ellen Mint › The Wolf in Mine by Paige Tyler