Temporarily Out of Luck by Vicki Batman 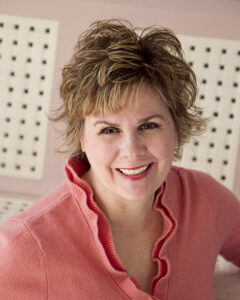 Hi, I’m Vicki Batman, sassy writer of romantic comedy mysteries and short stories. I’m often asked how my writing career began. Like a lot of writers, I first started as a huge reader. After I gobbled up Dick Francis’ mysteries, I confessed to Handsome how I wished I could write like him. It took me a long time to try. A friend knew I wanted to write. On a trip with girlfriends, she challenged us to write the opening paragraph of a book using the word window. I had nothing. So, when my turn came, she suggested I email something later on. Whew!

A few days later, I sat down at the family computer and began pantsing a story. I swallowed my fear and asked my friend to read the eight chapters I’d written. She passed them back, saying, “Keep going.” And I did. (BTW, she takes full credit for pushing me, too.)

Hattie Cooks scrambles to exonerate her sister when all fingers point to Tracey as the murderer of her ex-husband. 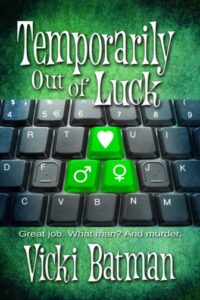 Great job. What man? And murder. Newly employed at Wedding Wonderland, Hattie Cooks is learning the industry from a woman she greatly admires. When her former brother-in-law is found dead in his luxury SUV, all fingers point to Hattie’s sister, who is planning her own I Dos.

Detective Allan Wellborn is caught between a rock and a hard place—Hattie’s family and investigating the murder of a well-connected Sommerville resident, the same loser who was once married to Hattie’s sister. Determining who’s the bad guy—or gal—isn’t going to be easy and sure to piss off someone.

Can Hattie beat the clock to find out who murdered Tracey’s ex before she is charged with the crime and her wedding is ruined?

Stuart bounded to my side. “Hattie. Allan. You’re naturals.”

I rolled my eyes. Great. I passed the tango test.

I stayed in position for what seemed like hours but most likely were five loonnng minutes. My lower back spasmed, which caused me to grimace. Allan pulled ever-so-gently and restored me to my feet. I removed my hands from his. Moisture coated my palms, and sweat dripped down my back along my spine. I was a wreck.

“Thank you so much, couple.” A beaming Ms. Yolanda rotated. “I’m impressed by your length and beauty.”

In my Book of Debts, I didn’t owe him one iota. However, I could hear my mother in my ear, trotting out a page from the “Right Thing to Do” lecture. What Stuart’s mom did broke all wedding protocol, and Allan doing his saintly thing told her he would help, which translated meant he desperately needed somebody else’s help.

“Fine. I’m in, but you owe me more, like a date to the”—I grasped on the first thing that popped in my head—”opera.”

I held back a giggle. “Since yesterday.”

“Jonson doesn’t comprehend the concept. Not with a small part”—with a mischievous grin, I crooked my little finger—”like his.”

Behind her hand, Tracey snickered for a moment, then grew somber. “And how would you know his man part size, sister dear?”

‹ Unbroken by Kira Stone › Yinka, Where Is Your Huzband? by Lizzie Damilola Blackburn