The Ack-Ack Girl by Chris Karlsen 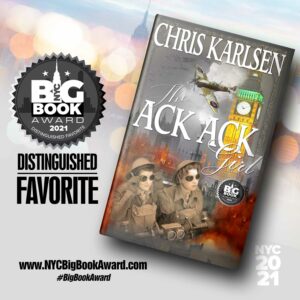 A country under attack and the story of one woman’s fight to protect England and her heart.

1941. The German war machine has crushed all of Europe-only England holds fast. To force a surrender, the German Luftwaffe bombs cities and villages the length of the country. As the battle rages, Britain is in desperate need to put more pilots in the air.

To free up more men a new unit is formed: The Ack-Ack Girls. These special teams of courageous women will now fight in the anti-aircraft stations. Determined to be part of the effort, Ava Armstrong, volunteers for one of the special teams.

Her unit just happens to be located near an RAF airfield teaming with pilots. Sparks fly, and not just from artillery, When Ava crosses paths with Chris Fairfield, a handsome and cocky pilot stationed there. But nothing is easy in time of war, not even love.

Ava put her new uniform bits away. Someone had left a flyer for a pub called the Two Roses in her stand. Skimming it as she headed toward the mess she ran into a solid body.

“Have a care, watch where you walk. You nearly trod on my foot.”

Startled, Ava looked up into a square-jawed, dark-haired pilot with a dimpled chin, who could pass for Cary Grant’s younger brother. Distracted, apologizing escaped her.

“I’d say I accept your apology had I received one.”

“Sorry, I was reading this flyer.”

He eyed her up and down. “You’re part of the new anti-aircraft branch of the ATS.”

He eyed the length of her again but this time a snort accompanied his comment. “I hope you can see planes better than tall men inches from you.”

The cheek of the man! She wasn’t about to let that comment slide. “Had you considered stepping out of the way when you saw me coming?”

“No, why should I? I was in this spot first. You’re lucky I don’t ask the captain to have your lot stop to salute us.”

“What cheek. Pardon me, I’m hungry and you’re boring.” Ava tucked the flyer into her jacket pocket and whispered, “Wanker” as she pushed past.

The wanker hummed White Cliffs of Dover and got in line behind her.

“Lieutenant Fairfield, it’s good to see you here. Finally on the mend?” the blonde, ATS corporal serving the food asked the wanker in a sugary voice.

“I still have the tail-end of the nasty pneumonia cough hanging on, but I believe I’ll be ready to return to my squadron this week.”

“We might see you around before then. When we have a bit of time to ourselves, my friends and I go for a pint at the Two Roses pub in the village. Come by and I’ll buy you a pint.”

“If they don’t send me off the same day as my orders come through, I’ll do that but I’ll buy.”

Ava made a note to ask what village they were near. No one had indicated so far and she was curious. She didn’t dare ask in front of the arrogant wanker Fairfield. He already thought her a clumsy goose. No need letting him think she was lost too.

She moved down the food line, pausing for a second trying to decide if she wanted the soupy mashed potatoes. Then a long, blue wool uniformed arm reached over her to take a roll, his tray clinking against hers.

“Excuse my reach but you’re taking too long and I’m ravenous.”

“You really are a wanker.”

“You wound me.” He pressed his hand to his chest. “At least I’m not a dawdler.”

He walked away with his roll before she could offer a comeback.

‹ Best Women’s Erotica of the Year, Vol 7 edited by Rachel Kramer Bussel › How to Speed Up Your Website