The Devil’s Lover by Alexa Piper 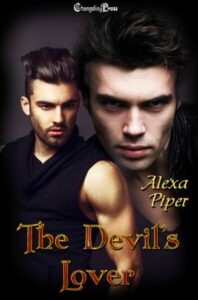 Lionel and Lucifer are drawn deeper into a murder case, but they are set on solving it together.

Just when Lionel’s love life has gone back to normal — normal meaning the kinky Devil making his ownership known — Lionel’s murder case gets stranger. Lionel’s birth father seems to have his hands in the mystery, and Lionel finds himself in the sights of Eris, goddess of discord.

Lucifer used to be a prime example of a powerful underworld deity with all the knowledge and skill to take care of a lover in the bedroom. But that was before Lucifer fell properly in love and won over his necromantic boyfriend, who also happens to be a demigod. Lionel’s innate magic, magical skill, and stubborn nature make it exceedingly difficult for Lucifer to be the alpha god he wants to be for Lionel.

Lucifer is set on finding a way to provide for the man he loves and to fulfill Lionel’s every desire. But before he can focus entirely on his necromancer, the two of them must solve the case, prevent primordial deities from being raised and destroying the world, and learn to communicate better. It’s what relationships and crime solving are all about.

She Captures My Heart by Karen Kay