The Enchanted Meadow by Kelley Heckart 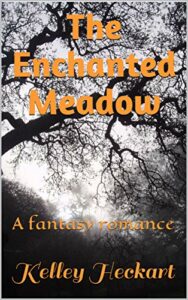 Step into this magical world of tree faeries and fated love.

Warriors from the Raven clan are sent to guard the king’s cattle. They are unprepared for the strange, otherworldly happenings in the new winter grazing land, including nocturnal visits by a beautiful lass. Only their leader, Taran, can save them if he remembers how.

Taran thought back to the dream. It had seemed so real, and he wondered if it really had been a dream. The lass differed from the other females he knew. Her copper hair and fair skin ignited his desires, but her striking green-eyed stare truly captivated him.

The lass sparked reminders of how he did not belong with his clan. His own hair was long and blond with copper streaks so unlike the rest of his clan who had black hair and dark eyes. After comparing his looks to the other clans, both allies and enemies, who had brown hair and amber eyes, he realized he differed from them as well. He’d heard that only the Fae were believed to have copper hair and light-colored eyes, a thought he’d always dismissed as fanciful. But the lass had stirred these nagging memories.

One thing that bothered him about the female in his dreams was that her eyes resembled the green eyes of the strange cow. Shivering, he snuggled into his blankets and fell back to sleep.

Scroll up and grab a copy today.

This is a revised 2nd edition. First edition was previously published by Freya’s Bower in their In the Gloaming anthology.

Dragon in Training by Emily Carrington