The Perfect Murder by Kat Martin 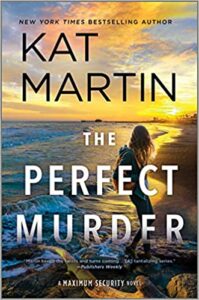 If you like your romance with a healthy dose of mystery and danger, it’s exactly the kind of summer escape you’ve been craving. —BookTrib on The Ultimate Betrayal

From Texas to the Louisiana bayou, the Garrett brothers will stop at nothing to catch a killer who’s hitting far too close to home…

As the CEO of a billion-dollar oil company, Reese Garrett has dealt with his share of corporate rivalry. What he hadn’t counted on was being the victim of a sabotaged chopper while negotiating a deal for the Poseidon offshore drilling platform—or the devastating fallout that would ensue. Reese feels the weight of the two men who died in the crash, and worse, it looks like he was the intended target.

Then another body turns up, one connected to both Poseidon and to Reese on a more personal level. His lover Kenzie’s ex-husband had a vested interest in the deal and now he’s dead, too, with Kenzie accused of his murder. When a series of clues expose a dangerous alliance, Kenzie and her young son find themselves pushed into the same deadly sight lines with Reese.

Now it’s not only the Poseidon deal that’s on the line—it’s their lives, as well.

Includes the bonus story Come Midnight—a routine flight turns into a hostage situation and two strangers must rely on each other to survive the dangerous jungles of Honduras.

‹ The Sparrow by Kristy McCaffrey › Sweet Bitterness by Tricia McGill