The Starling by Kristy McCaffrey 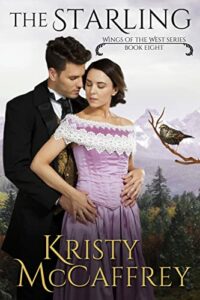 Wings of the West Book 8

Kate Ryan has always had a streak of justice in her. When she decides to apply to the Pinkerton Detective Agency, nothing will stand in her way. Initially hired in a clerical position, she quickly works her way up to field agent with the help of her mentor, Louise Foster. When Louise is injured, Kate gets her first assignment and the opportunity of a lifetime.

Henry Maguire has been undercover in the household of wealthy entrepreneur Arthur Wingate. Employed as a ghostwriter to pen the man’s memoir, Henry is also searching for clues to a lucrative counterfeiting scheme. When Henry’s “wife” shows up, he’s taken aback by the attractive woman who isn’t Louise. Now he must work with a female agent he doesn’t know and doesn’t necessarily trust. And because he has another reason for coming into Wingate’s world, Kate Ryan is unavoidably in his way.

Kate Ryan is the daughter of Matt and Molly from THE WREN, and THE STARLING is the first of five novels featuring the second generation of Ryans in the Wings of the West series.