The Texas Cowboy by Linda Nightingale 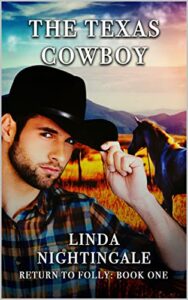 When Ash Colter was twelve, his mother divorced his cattle baron father and whisked him away to raise in her native England. Sixteen years later, when his father dies, he inherits Marathon Ranch. Running a 1,000-acre spread famous for the best Black Angus cattle in the great state of Texas is the biggest challenge he’s ever faced…until he meets a pert, pretty, and sassy ranch hand who seems to have her own agenda for his ranch. Unfortunately, she makes his spurs go jingle-jangle-jingle like no one else ever has!

Trish Owens is a real cowgirl, a loner, and, though she’d never admit it, a little lonely. When the “English Cowboy” appears on the scene, her entire way of life is threatened, not only her job, but her beloved Quarter horses. She’s sure he plans to import his thoroughbred horses from England. Worst of all is the chemistry sizzling between them. He makes feelings she thought long dead awaken.

Can these two unwilling allies set aside their differences to put Marathon Ranch in the Winner’s Circle…and to fall in love?