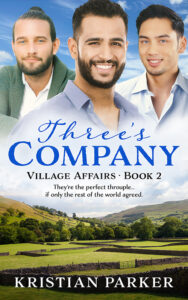 Book 2 in the Village Affairs series

They’re the perfect throuple…if only the rest of the world agreed.

Will Johnstone’s father is desperately ill, and he races home from London to the Yorkshire village of Napthwaite to be with him. Almost immediately he meets cute postman, Hardeep and mysterious newcomer, Andrew. There weren’t handsome men like this in Napthwaite when he lived here…

Heat flares between the three very different men, passion they have no intention of resisting, or denying. But having their roots deep and their lives entwined in a small village is not like living in a bustling metropolis. And with domineering mothers, problem teenagers, sick fathers and someone’s past knocking at the door, the path of true love is anything but smooth.

Can Will, Hardeep and Andrew, three very different people, steer their relationship past the rocks and find a way into uncharted territory…together?

Reader advisory: This book contains mentions of racism, on-page violence, and depictions of an abusive relationship.

Steam swirled in the air as Will Johnstone took the lid off the bone marrow broth that had sold like proverbial hotcakes since he’d insisted it went on the menu.

“Smells delicious,” Stacey, the new waitress, said with a wink.

Will smiled weakly. She had been flirting with him ever since she’d started. He would have to get one of the waiters to fill the poor girl in. She didn’t stand a chance.

To the untrained eye, the kitchen seemed to be in total pandemonium, but Will understood every move of this dance. He should. He’d been sous chef at Haven in Shoreditch for three years.

Serving under renowned chef, Anton Romano, he’d learnt all the foibles that his cantankerous boss preferred. As usual, Anton patrolled the pass where the plated meals waited to be served. If they stayed there longer than three minutes, he would scream at the restaurant staff until he went hoarse.

The month of August meant the traditional lull while valued customers enjoyed time on the beach in some far-flung place. Haven had that reassuringly expensive air that meant the clientele was more London’s high society rather than tourists. Will had decided to use this time to test out new dishes before the inevitable surge in September that built steadily to Christmas.

“Are you going to let all the air get to that fucking broth?” Anton shouted across the room. Will realised Anton meant him and dropped the lid with a clatter.

He didn’t even bother replying. Anton would be on to something else by now. That appeared to be the mousy new waitress whom he seemed determined to drive out of the door in less than two days. Will couldn’t remember if that would be a personal best for Anton or not.

These days, he didn’t even bother getting to know the wait staff unless Gustav, the maître d’, tipped him off that they’d lasted the first month. They would tend to stay on then.

Will hated kitchens in August. The heat outside made it unbearable. He’d often tried to persuade Anton to reduce the number of hot dishes they served but Anton wouldn’t have any of it. He didn’t seem to feel the heat or the cold.

The intensity of the kitchen had started to lessen, the orders coming in slower. Anton stalked past him towards his office.

“You may not,” came the reply.

The staff regarded Will with amusement. They loved it when Anton treated him like shit. Anton liked to play a divide-and-rule game in his kitchen. He ruled with a culture where he positively encouraged climbing on top of colleagues, and at least three people were eyeing Will’s position.

The smell of the duck main being prepped at the next station filled Will’s nostrils. Anton might be a bastard, but he was an absolute genius too.

It had gone eleven and there would be no more orders. His body ached, but he had that adrenalin rush he loved after a mad shift. It would be hours before he could even think about sleep. As the staff scrubbed everything in sight, he made his way through to the office.

Anton sat with his feet up on the desk, engrossed in a recipe book that could have dated to Noah’s time on the ark.

“That looks interesting,” Will said. Ever the optimist, he could almost imagine one day the ice thawing, and Anton bothering about their working relationship.

Anton snapped the book shut with a bang and put it in his drawer. He scowled at Will, daring him to speak. Tonight clearly would not be that night.

As a concession to his seniority, Will had the honour of being able to hang his coat and bag up in Anton’s office rather than the changing area. Instead of engaging with a riled Anton, he chose retreat.

He could visualise the cold bottle of Sancerre in the fridge at home if bloody Angela hadn’t stolen it.

“This came for you,” Anton said.

Putting his jacket on, Will turned around to see Anton holding up a letter. Will frowned. Who sends letters these days?

“It’s from head office,” Anton continued. His expression suggested he was passing something toxic to Will.

Head office was Anton’s kryptonite. People only mentioned it if they absolutely had to. Anton had this fantasy that Haven was his own personal restaurant. He didn’t want to accept that they were really being bankrolled by a Chinese investment firm. Most of the communications with head office were done by Will. It was nice to know he came in useful for the boring stuff.

Anton stood and wandered to the drinks cupboard they had in the office, that Will had been warned on pain of death to never touch.

“Fancy a whisky before you go?” Anton said, trying to come across as friendly which really did not suit him.

Will could have been knocked down with a feather. “Erm…fine. Just a small one.”

He poured a generous slug of Will’s favourite, Hibiki. His mouth started to come alive in anticipation.

Anton raised his glass. “To Haven.”

He took a sip. His tastebuds exploded with all the different flavours of honey, orange, sandal and oak. They fought and danced together as he took a second to enjoy it.

“A man of taste,” Anton said, walking to his chair and sitting. He gestured to the chair in front of the desk.

Will lowered himself and waited. This Hibiki had more strings attached to it than a double bass.

“It seems one of the little shitcans out there has made a complaint,” Anton said.

Everything slotted into place now. Anton didn’t want to lose face in the kitchen but didn’t mind trying to curry favour behind closed doors. What a wily bastard.

Anton pushed the bottle to his side of the desk. Will sank in his seat with a feeling of gloom coming over him. This was going to be a long session.

Contract Season by Cait Nary