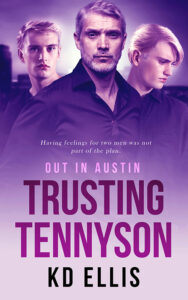 Book 3 in the Out in Austin series

Tennyson thought this would be just another undercover assignment. Catching feelings for two traumatized men wasn’t part of the plan.

When FBI Agent Liam Tennyson was embedded in the La Familia cartel, he didn’t expect to meet not one but two young men whose terrified eyes haunt his dreams—and stir up feelings he thought long buried.

Asher Downs left his homophobic family behind the day he earned his high school diploma. With little more than a bus ticket to his name, he moves to Austin to meet his online boyfriend, Devon. Unfortunately for Asher, life doesn’t always go according to plan.

Misha might have been born as Dimitri, but now he answers to whatever name Master gives him. Snaring another innocent young man into this life is the last thing Misha desires. But Master gets what Master wants—and Master wants a matching set of toys to play with.

When a mole in the justice department compromises Tennyson’s identity—and jeopardizes his plan to rescue Misha and Asher—Tennyson is left with no choice but to go on the lam. Can the two traumatized boys learn to trust him to keep them safe?

Reader advisory: This book references child trafficking, abuse and Daddy play. It is best read as book three in a series.

The boy on the screen was pretty. Blond, with copper-lined blue eyes—cornflower, not steel—and pouty lips made shiny from gloss, he looked like a doll. Men would pay thousands to fuck him and even more to fuck him up. It wasn’t hard to see why Master was enamored.

Misha hated him. Misha hated everything the boy stood for on the other end of a computer screen, thousands of miles away. He probably lived in some nice suburb with a white picket fence, with parents who paid for braces without complaint, drove him to swim classes and sat down for family dinners consisting of more than just oatmeal and water.

Misha hated his amateur videos that taught boys how to apply makeup, his comparisons of drugstore makeup brands and his mock fashion shows as he strutted around in skirts and heels and lacy blouses.

If the boy weren’t so pretty, if his videos hadn’t gotten so popular, he could have stayed under the radar and Misha would still be Master’s favorite.

Instead of sitting there, Master’s breath damp on the back of his neck while Misha crept his fingers over the keyboard to lure in his replacement. The pretty boy must get thousands of messages a day. Maybe Misha’s wouldn’t register, buried beneath the rest. Maybe he’d get it but not reply, and Misha would be safe.

Master’s attention, and his hands on Misha’s body, might terrify him, but not as much as the idea of losing it.

Asher Downs rattled his bedroom doorknob for the third time, just in case it had somehow come unlocked. Then, and only then, with his heart pounding in his chest, did he drag out the old Nike shoebox from under his bed, the one that used to hold his soccer cleats. Now, it hid his makeup case.

It was plastic and cheap, much like the makeup inside, odds and ends he’d bought discounted at the drugstore on the corner with change he’d picked up from the sidewalk and pilfered from the ashtray in the Buick, one lonely quarter at a time.

With reverence, he carried the case over to his desk-turned-vanity. The mirror was a cheap thing, bought on sale because it was cracked, the glass spiderwebbed from the top of the frame down one side. When his parents were home, he kept it tucked in the back of the closet, under a ratty baseball jersey he’d outgrown as a preteen.

His phone was already secured in his makeshift tripod—leaning against a book, the bottom half-inch tucked behind a two-pound dumbbell so it wouldn’t slide forward. As soon as he laid out his makeup, he could start the video.

His lipstick was barely a nub of pink in the cracked tube, his eyeshadow more dust than pigment. Even his foundation wasn’t quite right—a bit too dry and a little too light for his sun-kissed, boy-next-door skin, tanned from playing football each summer with the church youth group.

These broken beauties were his prized possessions, worth more to him than the collectible baseball cards in their little plastic sleeves on his bookshelf or the signed poster of Kobe that his dad had been so excited to hang up when Asher had started high school.

Before Asher had gotten caught kissing the captain of the basketball team under the bleachers.

Before the mandatory after-school meetings with Pastor Luke twice a week to ‘examine his soul’.

Now, his little brother Ryder wasn’t even allowed in the same room with him, his dad could barely look at him without scowling and his mother locked the cabinet doors in the bathroom as if she needed to hide her feminine products from his perverted eyes. She should have locked her makeup away instead, back when he’d been a boy and had first discovered the magic it held.

The way a bit of shadow could make his eyes piercing, soften his jaw or sharpen his cheekbones… How a little color could make him look happy, even when inside he felt like dying.

He’d come a long way since the first time he’d decided to film himself doing this, a silent protest against his parents that he’d devised under the influence of Dad’s bitter liquor, pilfered from the expensive stash he kept on top of the fridge. He hadn’t expected the video to go viral.

Now, he filmed sober, but nerves still birthed butterflies in his stomach. The fear of getting caught, which had him rattling his doorknob again, mingled with the excitement of watching his view counter tick steadily upward. He had almost a hundred thousand subscribers now, enough to put a little money into the secret bank account he’d opened as soon as he’d turned eighteen.

He could use it for better makeup or a ring light, but he was saving it to escape, maybe move out West, somewhere he wouldn’t have to hide anymore. He’d dipped into it once already for a better laptop after his old one had crapped out. He was going to need to upgrade his phone soon, too—an expense he couldn’t avoid but was delaying as long as he was able. His subscribers were already starting to comment on the graininess of the videos, and those wouldn’t take long to become complaints.

Mom promised he could stay with them until he graduated, but that was it, leaving him with just over a month to get a plan in place. College was out of the question. Unlike his younger brother Ryder, he wasn’t a computer genius who already had a dozen scholarships to choose from, and unlike they would for Ryder, Mom and Dad would never cover his expenses.

If he wanted out, he was going to have to do it on his own, a thought that finally motivated him to draw in a breath, plaster on a smile and push the red circle to start filming.

“Everything sucks and we’re all dying, but I’m going to look pretty doing it. Who’s ready to play with the pretty paint and give themselves a plus ten to their charisma check?” Asher jumped in with his quirky and somewhat nerdy greeting, smothering his real-world concerns beneath the joy that he got from doing makeup.

It wouldn’t last long—only until the video ended—but for now, for these handful of minutes, he was going to enjoy it.

KD Ellis is a professional cat wrangler by day, and an author by night. She moved from a small town to an even smaller village to live with her husband and wife and their two children. She loves reading—anything with men loving men. She writes queer romance in between working her two jobs and cuddling her pets—all six of them, which confuses the turtle.