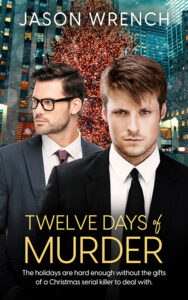 The holidays are hard enough for widowed NYC detective Frank Schultt without the gifts of a Christmas serial killer and a handsome FBI criminalist.

On the first day of Christmas, a serial killer gave to me, twelve-holiday murders…

A killer is on the loose in New York City during the Christmas holidays and it’s up to NYC Detective Frank Schultt and his partner to figure out who the killer is and put a stop to it.

Five years before, during the Christmas season, the widowed detective had found his husband shot dead in a liquor store robbery. He’s finally on the mend and trying to get his life and career back on track, but this case might prove too much for his recovery.

A mysterious FBI criminalist named Aaron Massey is assigned to help him solve the crimes, but the witty and attractive profiler raises feelings in Frank that he doesn’t know how to handle.

Can Aaron help Frank break through his emotional walls fast enough to stop the killings, solve the case and fall in love before Christmas?

Reader advisory: This book contains vivid descriptions of crime scenes and body parts, plus a hostage scene with a shooting, references to drug addiction, trafficking and implied sexual abuse of children.

Mornings were never something Frank looked forward to. His usual routine consisted of waking up at around six a.m. and heading over to Club H, a couple of blocks from his walkup apartment in Hell’s Kitchen. Club H had all the trappings of a top-notch gay bar—pumping rhythms commonly heard at circuit parties, guys cruising each other left and right, hot, fit men as far as the eye could see. But Frank wasn’t interested in any of those. Frank came to Club H for its intended purpose—to work out. This particular morning would have to be cut short, as Frank was meeting his best friend Logan for breakfast before heading over to the precinct.

Frank arrived at the gym and stored his stuff in an available locker, noting the locker number in his head. 101… That shouldn’t be too hard to remember. He grabbed his iPhone, found the first free treadmill and started jogging. Frank found the early morning ritual a great way to clear his head. He increased the speed and incline, losing himself in his workout. He looked around at some of the younger guys in the gym. Many were over in the free-weight section, lifting weights with partners in an erotic exchange of muscle and steel. Frank had long ago realized that being ripped was less important than being healthy.

When Frank had been in the academy, one of his classmates—a tall, brutish guy named Theo—had stood out because of his bulging muscles and neck thicker than a Christmas ham. Unfortunately, the guy had ended up having a heart attack during his second week, due to having no cardiovascular ability at all. Sure, he may have made the Incredible Hulk a little jealous, but, as a cop, Frank had become aware that brawn didn’t get anyone very far if it wasn’t equally matched with stamina.

Frank looked around the room and nodded politely to some guys he’d known over the years. Jerry was over in the corner with his new boyfriend, Seth. Frank had met Jerry about three years ago in a back room at The Eagle, an NYC bar that catered to people looking for edgier sexual experiences. After Adam had been murdered in the liquor-store burglary almost five years earlier, Frank had tried to find solace in a range of sexual fetishes. As each one failed to make him feel whole, he’d moved on to something even edgier. He’d also started doing some light drugs and graduated to crystal meth, fearing each day he’d be randomly drug tested. He was good at keeping up appearances at work and never did drugs that required a needle.

After finishing his six-mile run, he grabbed his towel and iPhone and hit the showers. Although showers in most gyms took on a certain homoerotic quality, Club H’s were notorious for hookups. Frank had learned long ago to just go in, shower and pay no attention to anyone around him. He toweled off and got dressed, throwing his dirty gym clothes into his duffle bag. As he was leaving, he heard two guys having sex in the steam room. He thought about warning them that Club H was a public space and that sex was technically illegal there but decided it wasn’t worth his time.

As Frank exited Club H, the cold morning air hit his warm face like a thousand little icicles. Frank pulled out his cell phone and dialed Logan’s number. “You up and at ‘em yet?”

“As a matter of fact, I’m already at the Midtown Diner.”

“Great. I just got out of the gym, so I should be there in ten minutes. Order me the usual.”

Frank hung up his cell phone, putting his AirPods in his ears. “Siri, check messages.” A female electronic voice informed him that he had zero new messages. Frank had Siri play his favorite podcast as he continued trekking down East Forty-Third Street, crossing Broadway and heading toward Central Park. Frank liked it when he was by himself, alone in his head, taking in the early morning rush that was Midtown at eight a.m. Midtown had more foot traffic by that time than most cities did in an entire day.

Ahead, Frank recognized the yellow-and-purple awning, the entryway to the Midtown Diner. Frank and Logan often met there for breakfast, as it was near both Frank’s precinct and Logan’s law office. Logan and Frank had been friends at the Leysin American School in Switzerland. It was a boarding high school. Frank’s parents owned Schultt Pharmaceuticals and had sent Frank there since both of them had been too busy with their own lives to worry about their son. When he’d graduated from high school, Frank had come back to the States and gone to Yale, where he’d majored in business, the heir apparent to the Schultt empire. Instead, Frank had come out right after graduation and his family had disowned him. The blowup had happened when Frank had told his father he was gay. Those had been the last words Frank had ever spoken to his folks. He’d dropped off the map for a while, moved to New York, got a master’s degree in Criminal Justice from New York University, joined the academy and the rest was history.

Frank took off his coat and hung it on a peg inside the door as he entered the diner. He looked around and found Logan sitting at a table reading The New York Times.

“I’m not useless. Real-estate law is an important branch of law in this town, mister.”

“Oh yes, helping all those fat cats who own this city get richer and richer while the lower and middle classes end up committing crimes just to make it by.”

“Dear God, what a sob story. Just because you think everything is a matter of who’s getting screwed and who’s screwing, don’t bring my job into it.” Logan looked at Frank and smiled, likely knowing full well that this would hardly be the last time this little conversation would occur. “So, any hot guys at the gym today?”

“That’s the one. Well, he was there with his newest ‘thing’.” Frank always told Logan everything that was going on in his life, even the seedier parts. Unlike most people, Logan never outwardly judged. Frank could tell when Logan wasn’t happy with him, and Frank never wanted to hurt or disappoint him. So, when he did, he knew he’d screwed up royally.

The waitress arrived at the table and put a plate with two pieces of bacon, two eggs and two sausage links in front of Frank. She came back a minute later and freshened Logan’s cup of coffee.

“So, Frank, how are you doing? I know you don’t want to talk about it, but dammit, I’m your best friend and have the right to be concerned.”

“Well, we’re creeping up on the fifth anniv—”

“I know, so drop it.” Ever since Adam’s murder, Frank had kept that part of his past bottled inside, refusing to release it. Once or twice a year, Logan would check in and see if Frank was ready to open up, but he never was.

“Oh, I was watching It’s a Wonderful Life last night with Ben. He says ‘hi’, by the way.”

“How’s that new show of his going?”

“Even hearing you talk about it sounds like a bad idea.”

“I know… Tell me about it. But Ben was so proud of being on another soap. Anyway, he has been cast in the off-Broadway revival of Arthur Bicknell’s Moose Murders.”

“Now, I’m not exactly a Broadway aficionado, but what the hell is that?”

“Yeah, that was my response. Apparently, it was some play from the 1990s that was a huge flop. I googled it. The story sucks and should never have been revived, but I’ve got to be supportive, nonetheless.”

Frank laughed and choked on his coffee. “So, why’d you bring up It’s a Wonderful Life?”

“Oh, Ben and I always watch it a couple of times each Christmas season and again on Christmas…” He realized what he’d just said to Frank. “Oh God, I’m so sorry. I totally forgot for a moment…”

“It’s okay. I hate that film. It’s so fucking sappy. Every time a bell rings an angel has its wings ripped off and is bludgeoned to death.”

Frank was about to make a comeback when his pants pocket vibrated. He pulled out his phone. “I’ve got to get this,” he told Logan. “Detective Schultt… Oh, hey, Jasika… There’s a what? At FAO Schwarz? Okay, I’ll be there in about ten minutes, depending on how many tourists get in my way.”

“What was that about?” questioned Logan.

“They’ve found a body part over at FAO Schwarz, hung like a Christmas ornament. You call me jaded. I may hate this fucking holiday, but at least I’m not hiding body parts in a toy store.” Frank took out his wallet and threw down enough cash to cover his meal and coffee. “I’ll talk to you later.” With that, Frank turned and headed toward the door, grabbing his coat as he walked back outside into the December cold.

Jason Wrench is a professor in the Department of Communication at SUNY New Paltz and has authored/edited 15+ books and over 35 academic research articles. He is also an avid reader and regularly reviews books for publishers in a wide number of genres. This book marks his first full-length work of fiction.

Find out more about Jason at his website – https://www.jasonwrench.com/

Notice: This competition ends on 30th November 2021 at 12am EST. Competition hosted by Totally Entwined Group.