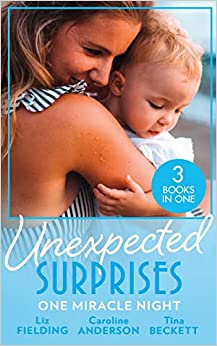 Pilot Miranda is too sick to fly her plane, and she must face the truth: she’s pregnant! She knows that her boss, Cleve is still grieving for his late wife. To escape and think, she heads to her sister’s Mediterranean palazzo. But Cleve turns up with a dramatic offer: a convenient marriage as soon as it can be arranged! It may be the sensible answer…but is it enough for Miranda?
•
Senior paediatric surgeon Alice believes she’ll never conceive. So she’s stunned to find she’s pregnant after one spontaneous night with colleague Marco! She might be his buttoned-up boss, but their chemistry is off the charts. And when Marco whisks Alice to his family’s Italian castello she discovers he’s determined to claim both his baby…and her heart!
•
The last thing Dr Sebastian wants is to settle down, but when one sizzling night with sexy nurse Sara results in pregnancy he feels he must do the right thing! Sara refuses to marry for anything less than love! Though she does agree to work at Sebastian’s hospital – where the temperature between them grows hotter than ever…