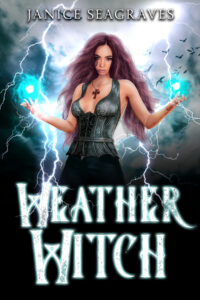 Regency Nobleman Lord Godfrey is negotiating for a wife, until Meredith literally storms into the Manor. Then all bets are off as he tries to tempt the tempestuous nymph into marrying him.

Lord Godfrey considered his potential bride, Arianna. Her blonde head bowed and her hands folded in her lap. She only looked at him once when they were introduced. He didn’t even know the color of her eyes.

“My daughter’s dowry is substantial.” The girl’s mother, the widow Lady Cawyn, sat at the head of the large mahogany table. They were neighbors, so any arranged marriage would be beneficial for both parties.

“So you’ve said.” Lord Godfrey cleared his throat. He preferred a bit of fire in his women. He stared at the girl and pitched his voice low and gentle so as not to spook the child. “I’m landed gentry. My estate is large and self-sufficient. I can offer the apple orchard that borders both our properties, and a hundred head of cattle. In times of war, I can lend retainers to your mother. You will receive a title and be well provided for. Any issue will have an education. How does that sound to you?”

Lightning flashed, illuminating the long narrow, leaded windows in the thick stone walls. Thunder boomed. Both women jumped. The storm rolled in suddenly and it had rained most of the day.

Arianna jerked her head up to stare outside with light blue eyes. “Mother, the storm is gathering strength.”

“I know, daughter.” Lady Cawyn’s hand flitted about her throat touching a heavily beaded necklace. Lightning flashed as thunder crackled right behind. She flinched. All at once, the necklace snapped and fell into her lap.

A maid hurried forward and rescued the jewelry. She handed it to the butler.

Lord Godfrey frowned. Odd that the sudden storm seemed to spook both women.

Rain poured down hard, peppering the leaded glass windowpanes. Thunder rolled overhead. As the noise faded, someone pounded at the entrance doors.

“No, don’t answer it.” Lady Cawyn’s pressed her hand against her chest as she stared at the entry doors.

Arianna jumped up, pushing her chair back with an ugly scrape. “She’s here.”

“I know, daughter.” Lady Cawyn pressed her lips together into a thin line.

“She’ll be angry.” Arianna fisted her hands and turned toward her mother. “I told you not to do it, Mother.”

“Who will be angry?” Who or what has them so anxious? Lord Godfrey eyed the two frightened women.

All at once there came a mighty bang, not unlike the sound of lightning hitting a tree. Thunder rolled overhead. As the sound faded, pounding feet rushed down the outside vestibule. The double doors were flung wide. In a sudden gust of wind the candles blew out.

The maids and butler rushed to relight them. Lightning momentarily lit up the room.

A woman in scant clothing stood at the foot of the table, dripping wet, her hair plastered to her head and shoulders. Anger flashed in her stormy expression. Her hair was the color of Merlot wine, and her eyes gray as a rainstorm.

“Old woman, where is my son?” The woman’s voice was husky.

He stood and stared at the apparition bathed in candlelight. Her breasts heaved as she took in great gulps of air.

“Now this woman has fire.” He didn’t realize he’d spoken aloud until every person in the room turned toward him.

Janice Seagraves grew up with a deep love of science fiction and adventure stories. Always the consummate artist, she traded in her paintbrush for a laptop to write breathless life-affirming novels that celebrate enduring love.