When Destiny Calls by Tricia McGill 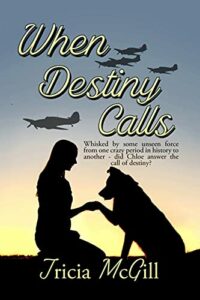 From one crazy period in history to another.

Whisked by some unseen force from the Covid-19 ridden world of 2020 in Australia, to an equally horrific time in the past, carer Chloe Simpson finds herself in North London during the Blitz of 1940. Could be that Chloe became too immersed in the stories related to her by Minnie, a woman in the Australian nursing home where she cares for elderly people. Stories about the dreadful days and nights endured during the Blitz.

Engrossed in the stories surrounding photographs in 98-year-old Minnie Clacton’s cherished album, back in time Chloe meets up with the young Minnie plus her own Great Great Grandmother Aggie.

In the midst of an air raid, Chloe is discovered, wet and confused, by a man and his dog. A man and his canine companion who coincidentally appeared prominently in the photo album alongside the young Minnie and Aggie. Did Chloe simply answer the call of Destiny?