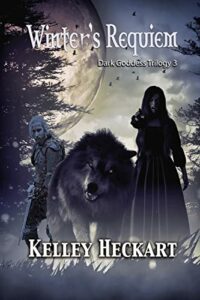 Do you like epic paranormal historical romances set in mystical Scotland?
The eruptive conclusion to the Dark Goddess saga is packed with adventure, intrigue, and magic.

Three powerful females hold the fate of the world in their hands.

To find the traitor that still threatens Dal Riata and Aedan, Domelch journeys down a perilous path into certain danger. Brigit is drawn back to Gartnait, but her unrequited love for the sullen king forces her to make a harmful decision. When Cailleach awakens in a different body in enemy lands, she finds herself powerless and is captured by an enemy prince. In his arms, lost memories return, and the truth of the Dark Goddess’s tragic past leads Cailleach down a path of rediscovery and dangerous choices.

With war ravaging the land and the re-appearance of an ancient De’ Danaan foe, Domelch is forced to ally herself with Brigit and then with Cailleach, a decision that shatters her life with Aedan. Surrounded by a web of deceit, the three women are forced to trust one another and discover they share a past fraught with lies and tragedy. To prevent eternal winter, all three must make difficult choices and sacrifices to break an ancient curse that threatens to destroy everything they care about.

˃˃˃ This series must be read in order