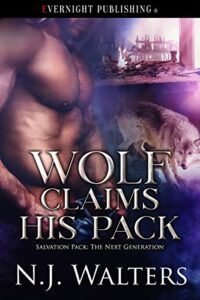 Salvation Pack: The Next Generation Book 3

Half-breed wolf and blacksmith, Bailey Smith’s life is complicated. She’s alpha of a small pack consisting of her teenage brother and three other kids. Her grandfather—a pure-blood wolf—wants her and her brother dead. And now a confrontation with two human males has brought Child Protective Services to her door. If that wasn’t enough, she’s caught the attention of an unknown, sexy-as-hell, male wolf.

Nicholas LaForge has found his mate and purpose. Being a full-blooded wolf is a strike against him, but she marries him to protect her kids. He’ll use whatever sneaky methods necessary—including sex—to convince her they belong together. First, he has to deal with the threats to his new pack. That’s the easy part. Winning her love and trust might be impossible.